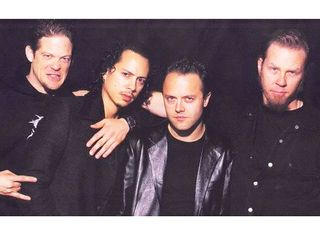 Metallica with Newsted (left). There is none more 'Black'

When Metallica take to the stage to play 4 April after their induction into the Rock And Roll Hall Of Fame, some people might be surprised at which version of the band they see.

It won't be the current Metallica with bassist Robert Trujillo; rather, it will be the 'Black Album' band, with Jason Newsted. And count Newsted himself as one who is stunned and amazed.

Speaking to Billboard, Newsted said he planned on attending the induction ceremony with the idea of simply "looking good in my suit, hanging out with my family, going up and getting the award, making a nice speech..."

But last Thursday, drummer Lars Ulrich called Newsted (who quit the band in 2001), and said, "We want you to rock with us."

Newsted was elated but concerned: "How's Robert with that?" he asked Ulrich."How does he feel about that? I don't want to create any kind of negative anything. I want this all to be proper."

Ulrich calmed Newsted's fears: "He's with it, man. He wants to be there as a fan, too, and wants to see the 'Black Album' band. It's all good. Everybody's agreed to it. Let's rock!"

One person who won't be part of Metallica's induction, however, is former band guitarist Dave Mustaine, who now fronts Megadeth.

"Its not my decision," says Newsted. "I have nothing to do with that. It was decided by the band, and I think it was just a hard-and-fast rule...Anyone who has recorded on any Metallica recordings that have been released to the public as an official release were invited to the induction. So, that's kind of that."

And yes, the late Cliff Burton will be inducted. His father, Ray Burton, will be on hand to represent his son.

As for Metallica's set, Newsted promises a no-holds-barred metal experience. "There's not a lot of bands that get inducted into the Hall that can still fucking knock it down.

"We're all still clear-eyed and clear-minded and able-bodied, and all that, so its not something that always happens. We're getting called out pretty early, so for us to be strong and capable to still mow everybody down, as it would be expected, is a fantastic thing."