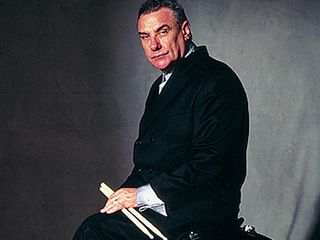 Bill Ward was interviewed on the 7 August edition of the Friday Night Rocks radio show on New York's Q104.3 FM.

The drummer talked about why he pulled out Heaven & Hell - the band featuring fellow Black Sabbath members Tony Iommi (guitar), Geezer Butler (bass) and Ronnie James Dio (vocals) - in November 2006, while the group was recording three new tracks to be included on the compliation, Black Sabbath: The Dio Years:

"Let me see if I can say this as comfortably as I can, because there's some sensitive stuff about this, and I haven't spoken at public level about any of this stuff...

"There was a musical difference. For quite a long time now, the only band that I've ever felt comfortable in is the original band. And I've tried to do Sabbath with Ronnie, Sabbath with Ian [Gillan] and Sabbath with other singers as well. And as much as I either like, or don't like, these guys or whatever, it never feels the same to me. And I've never been able to make that move when it comes to being with Tony and Geezer with another singer.

"However, I thought that because, originally, we were talking about Ronnie - when we were first trying to put some of this together - and I thought, 'Well, I'm gonna have an open mind to this.' But, at the time, it felt like I was kind of backpedalling a little bit, but I thought that I would be able to actually hang with it and do it and what have you. So I went in there as much as I could with an open mind.

"A couple of things happened, which I'm gonna have to keep private, which, actually, I felt very angry about. Originally, there was some stuff on the business end, which really, really, really cut me up. And there's still some unresolved things on the personal end as well, which I'm hoping to have clarified and resolved one day - one day it'll clear up.

"Playing a straight beat through was absolutely against everything I know about drumming, and it was an intolerable request"

"But the main reason inside everything was that Tony, on one of the songs, it was a pretty fast song, was pushing his guitar - it was just like a down beat - and in all the years that I've played with him, since I was, like, 16 - me and him have played together a long, long time - I've never cut across him.

"In other words, I never go through him - I don't travel through him, I travel around him, and I either build or I pull away, or I make holes, or I do whatever I can do to make sure that I am interacting with the bass and the guitar in the way that I do it. It was requested of me to play a straight beat through, and playing a straight beat through was absolutely against everything I know about drumming, and it was an intolerable request. End of story. I can't do that, and I'm not gonna do that to Tony."

"I'm out of that situation, [but] I support [Heaven & Hell] completely. I've already seen them play live. I thought that Geezer was absolutely amazing - he blew me away; I was like, 'My God, that's my mate up there playing.' I've known Vin [Heaven & Hell drummer Vinny Appice], basically, since he was kid. I know all of the guys, so where I'm at with it, I completely support them."

Ward added he would get back together with Iommi and Butler if Ozzy Osbourne was on vocals - a reunion of the original Black Sabbath lineup.

"If everything gets in order and everybody is on the same page, or even half a page, I'm ready to do multiple tours, or multiple albums, with the original band. I always have been; I've never moved from that stance in the last 30-odd years. So I'm down [with] that."

(Much more via Blabbermouth)