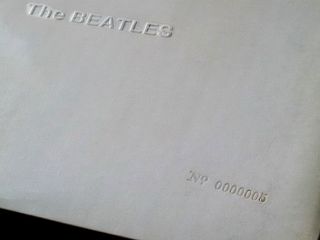 The Beatles 'White Album' has sold over 19 million copies. So how can it be 'rare'? Because the one currently for sale on eBay is serial number 0000005, that's why.

John Lennon, Paul McCartney, George Harrison and Ringo Starr snatched up numbered copies 0000001 to 0000004, and no telling when, if ever, they'll make it onto the market.

On 22 November it will be exactly 40 years ago since The Beatles released, er, The Beatles (that's its official title), so it's somehow prophetic that this most sought-after pressing is up for grabs.

Cover, labels, poster, audio, inner sleeves - all are ranked from 'Very Good Plus' to 'Near Mint,' so this is as close to the Holy Grail as you're going to get.

As of press time, the bidding is at £1070 (approx. $1600), but with nine days before the hammer comes down, there's no telling how much this baby's going to fetch.

Whether you're a card-carrying Beatlemaniac (like many of us) or simply a collector who knows a good investment when he sees it, this is one 'White' sale you can't pass up.