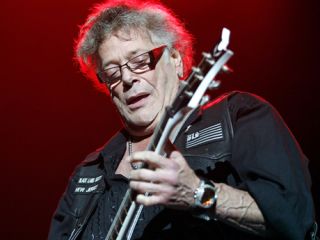 Got a question for Leslie West? Ask away! © Sayre Berman/Corbis

Leslie West has had some year: Last June he lost a leg to diabetes, and only a few months later, while still recuperating, he released Unusual Suspects, a star-studded affair that might rank as his best effort in two decades.

Which is saying something when you consider the seminal recordings West has put out, whether on his own, with West, Bruce & Laing or his legendary band Mountain.

You can read all about Unusual Suspects in our track-by-track album preview, which includes exclusive commentary by West himself. And it gets even better: next week, Leslie West is taking part in a MusicRadar interview, and you get to ask the questions!

What to ask? Well, you can try to get him to explain to secrets to his much-sought-after tone. Or you can ask him about Unusual Suspects and the many brilliant guests stars who appear on the album. You can always ask what it was like to play with The Who on Who's Next? And, of course, you can ask him how he's feeling and what his plans are for 2012 (by the way, he says he will be touring somehow, someway).

What to do now?

Get involved! Choose your question for Leslie West and submit it like this:

We'll pick the best ones and pose them to Leslie West next week. Good luck!