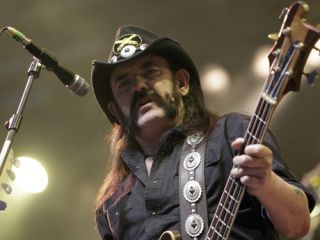 Two new documentaries about veteran British rockers are receiving their UK premieres as part of this year's London Film Festival, dispelling any myth about the music business being a young man's game.

Lemmy is a fly-on-the-wall study of the 64-year-old Motorhead legend, while The Ballad Of Mott The Hoople looks back on the career of the glam rock stars (including 71-year-old singer Ian Hunter) in the run-up to their 2009 reunion shows at the Hammersmith Apollo.

In Lemmy, directors Greg Olliver and Wes Orshoski shadow the Motorhead frontman over a period of three years as the group continue to bring their high-octane metal to the masses and finish the recording of their 25th album, Motorizer.

Footage from live shows in the US and Europe is interspersed with scenes of Lemmy in his cramped Los Angeles apartment, surrounded by piles of band-related memorabilia, not to mention an extraordinarily large collection of knives and Nazi insignia.

There are revealing scenes of Lemmy hanging out at his favourite bar (the Rainbow Grill on Sunset Strip) and candid conversations with his musician son Paul Inder, plus clips of him jamming with Foo Fighters' Dave Grohl, The Damned, Metallica and former Stray Cats drummer Slim Jim Phantom, the latter his partner in crime in a rock 'n' roll covers hobby band The Head Cats.

The Damned's Captain Sensible is one of several famous fans paying tribute on scene (describing our enduring hero as "the antidote to Simon Cowell's evil shit"), alongside Ozzy Osbourne, Slash, Peter Hook and Jarvis Cocker.

An engaging subject throughout, Lemmy speaks openly about his '60s beginnings in beat scene also-rans The Rockin' Vicars, his incident-packed days with (and subsequent dismissal from) space rockers Hawkwind, and, of course, the longevity of Motorhead.

He's self-effacing throughout, emerging as an honest and approachable man with a sly sense of humour. When asked about his fascination with Nazi artefacts and clothing, he says "I'm not a Nazi, I just dress how I like to dress. I've had six black girlfriends so far, which makes me the worst Nazi in the world."

The Ballad Of Mott The Hoople, from the directorial team of Chris Hall and Mike Kerry who made Love Story, the 2006 film about Arthur Lee's seminal '60s band, is more of a historical document, with archive footage playing as great a role as fresh interviews with the five original members.

Mott on stage at one of their 2009 reunion shows in London. © Tom Callins /Retna Ltd./Corbis

The movie charts their rise from a jobbing live band with little record success to the pivotal moment when David Bowie's All The Young Dudes gave them a long overdue hit to their subsequent falling out when Hunter began to take a more dictatorial hand in band matters.

Mott's relationship with volatile producer Guy Stevens is covered in great depth, as is their transition into glam superstars ("they looked like hod carriers in drag," suggests Roger Taylor of Queen, who supported the band in the early '70s), although there's no mention of the 2009 reunion shows, the directors having conducted their interviews two years earlier. However, brief footage of the Hammersmith shows does feature over the closing credits.

Hunter comes across as affable, if a little oblivious to the resentment other members began to feel towards him, countering that he was uncomfortable with the pressure of having to write the bulk of the songs. He concedes that the arrival of David Bowie's former guitarist, Mick Ronson, in 1974 upset the balance of the group, bringing in his own separate management team and refusing to talk to the rest of the band.

One telling quote from Hunter tidily sums up both of these documentaries in a nutshell, though: "Sex and drugs and rock 'n' roll is bloody hard work."

Lemmy is screened as part of the London Film Festival on 23, 25 and 27 October. The Ballad Of Mott The Hoople is screened on 19 October. Check local press for upcoming regional screenings. Both films are due out on DVD next year.