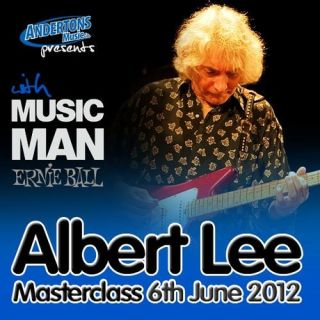 Anderton's Music has revealed that it will be hosting a rare UK guitar masterclass with British guitar legend Albert Lee in Guildford on 6 June.

The event will be hosted in conjunction with the Ernie Ball Music Man brand at the Radisson Blu Edwardian Hotel at 7.45pm and tickets, priced £6 (including a goodie bag with some Ernie Ball strings), are available now from the Anderton's website.

Albert Lee made his name playing with the likes of The Everly Brothers, Emmylou Harris and Eric Clapton (who famously once dubbed him the "greatest guitarist in the world").

Guitarists rightly idolise the country-style player for his amazing hybrid picking (a technique that combines both plectrum and finger-picking) and his imposing speed, as demonstrated in the likes of Lee's hit Country Boy (video below).