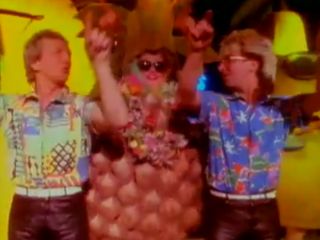 Black Lace is back, whether you care or not

File this under: We Really Can't Explain This At All. A 1984 song called Agadoo, made famous by a group called Black Lace, named the worst song of all time by a panel of music journalists, is being re-released.

Upon its original release 25 years ago, Agadoo,described as "magnificently dreadful" by Q magazine (and we couldn't agree more), peaked at number 2. It was kept from the coveted top spot by George Michael with his ballad Careless Whisper.

For reasons we still can't fathom, original Black Lace member Dene Michael is getting the gang back together (minus Michael's original band mate Alan Barton, who died in a bus crash in 1995) and is putting the song out again.

According to Michael, "With all the doom and gloom in the world, this is just what we need."

We guess that's as good a reason as any. In case you weren't hip to Agaddo when it first appeared, it went a little something like this...

The song proved so popular that is was spoofed by the show Spitting Image as The Chicken Song.

Frankly, we prefer the latter.