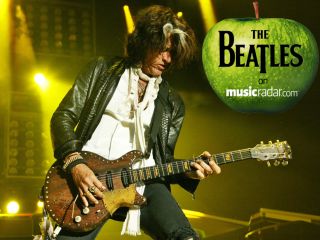 "I was already into rock 'n' roll and pop music before The Beatles hit America. I remember being a little kid and seeing this guy Elvis Presley on TV - the girls would scream when he came on. That kind of stuck with me.

"The stuff I was into were things like Roy Orbison and the Phil Spector hits. I was definitely a music loving kid. From my earliest days, whenever I heard music, I felt happy and forgot all my problems.

"In fact, I even started playing guitar at a young age. My parents bought me a Silvertone acoustic guitar that cost $12.95 and it came with a little 45 single that said, 'Hold the plectrum with the right hand and the neck with the left.' I'm naturally left-handed, but since that's how the record said to play guitar, that's how I did it - it never occurred to me to change.

"The night The Beatles first played the Ed Sullivan Show, boy, that was something. Seeing them on TV was akin to a national holiday. Talk about an event. I never saw guys looking so cool. I had already heard some of their songs on the radio, but I wasn't prepared by how powerful and totally mesmerizing they were to watch. It changed me completely. I knew something was different in the world that night.

"Next day at school, The Beatles were all anybody could talk about. Us guys had to play it kind of cool, because the girls were so excited and were drawing little hearts on their notebooks - 'I love Paul,' that kind of thing. But I think there was an unspoken thing with the guys that we all dug The Beatles, too. We just couldn't come right out and say it.

"All of that changed when I went to see A Hard Day's Night. I wasn't into sports, I wasn't a great student, I didn't go out for school activities or anything - I was just kind of into my own little world. But seeing The Beatles on screen, running around and laughing, plus seeing them play all these incredible songs, I started to think, 'Hey, I wouldn't mind doing that.' It was like The Beatles were their own gang, and that seemed so cool to me."

"Quite soon after, I started getting into the Stones and other British groups, and the idea of playing the guitar seriously and being in a band really took hold. I followed all The Beatles records, of course.

"What's funny is, even though they were making so many breakthroughs sonically and changing the way music could be presented, I didn't process it that way at the time.

"Everything seemed to flow so naturally from them. You'd pick up Rubber Soul and it was fantastic. Then you'd get Revolver and it was amazing, too. You just came to expect it from them. I had no idea what hard work went into doing what they did.

"Guitar-wise, it's hard to say specifically what I got from them, other than their licks became part of my DNA like so many of the British bands I stated to follow, like The Yardbirds and Cream and Zeppelin. It all became this fantastic cocktail of guitar greatness that I was only too happy to drink in.

"Later on, probably around the late '60s, when they were getting ready to break up, that's when I started to appreciate what geniuses The Beatles were, how they set trends and broke every rule in the book. How they went from being this live group to mastering the recording studio and showing everybody that nothing was impossible, as long as you had the imagination and the guts to go for it.

"Plus, they had gone from singing these simple love tunes to writing songs about any topic you could think of. I think that's what really impressed me the most - they taught me that music could liberate you, teach you, take you somewhere else, expand your consciousness, all of that.

"The Beatles taught us all so much. They taught us to be brave, to follow our dreams and aim high. That's a wonderful legacy to leave."

Joe Perry is a guitarist, songwriter and singer for the band Aerosmith. His newest solo album Have Guitar, Will Travel comes out 6 October.