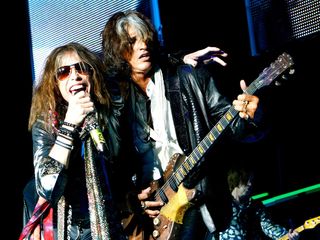 Aerosmith have been forced to cancel the remaining dates of their summer tour due to injuries singer Steven Tyler sustained after falling from the stage during a concert in South Dakota on 5 August.

According to a statement on the band's website Aero Force One, doctors have advised Tyler to take time to properly recuperate from the accident (see video below).The singer's injuries include a broken shoulder and 20 stiches to the back of his head.

Ticket refunds for the rest of the tour dates with special guests ZZ Top will be available at point of purchase.

Joe Perry thanks the fans

"Words can't express the sadness I feel for having to cancel this tour," guitarist Joe Perry said in the statement. "I would like to thank our loyal fans for sticking by us through thick and thin and all the good energy they are sending our way.

"We hope we can get the Aerosmith machine up and running again as soon as possible. I sure am going to miss playing with ZZ Top just as I'm sure the fans are going to miss seeing them playing with us as well. Hope to see you sooner than later."

Thus comes to an end one of the most injury-plagued tours rock 'n' roll has ever seen. Before the band even hit the road, Joe Perry underwent knee surgery. Then co-guitarist Brad Whitford banged his head after getting out of his Ferrari, forcing him to miss several shows.

All of which proves two things: A) Rock 'n' roll can be dangerous work, and B) it doesn't always pay to own a Ferrari.