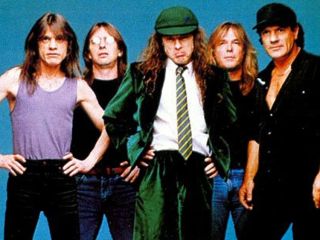 AC/DC: soon to be packing them into theatres?

We've heard a strange rumour that a new musical based on the music of AC/DC could be in development. Gossipy email newsletter Popbitch reports that this has a working title of It's A Long Way To The Top and will have a plot based on a combination of the band's history and the tepid Mark Wahlberg movie Rock Star.

Several bands' back catalogues have been used as the basis for musicals in the past - the Queen-inspired We Will Rock You and Abba-infused Mamma Mia! are probably the two most successful shows of this ilk - but MusicRadar finds it hard to imagine theatre audiences responding well to some of AC/DC's material.

Let Me Put My Love Into You, for example, doesn't sound like matinee fare, while Givin The Dog A Bone - the band's ode to a woman who's 'no Playboy star' - is unlikely to go down well in the West End either. And as for Squealer… well, we'd rather not go there.

Still, let's look on the positive side: the whole thing could be a massive wind-up, and even if it isn't, at least there's no suggestion that Ben Elton is involved.