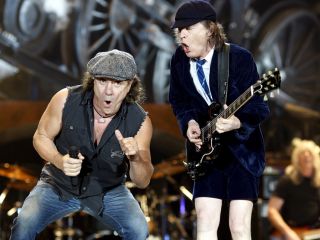 AC/DC have long been a band that resists change - and it's worked out well for them. Until now. A group of devout fans are demanding that AC/DC change its setlist.

Apparently, the Black Ice tour has featured the same songs in the same order since it began on 28 October 2008.

In a posting on acdcfans.net, an open letter reads:

"On the current Black Ice World Tour, during which some of us having travelled across Europe, the United States and flown between the two continents (with flights already booked to Australia to catch the Australian leg), we have listened to you play the same great songs each and every night.

"We absolutely appreciate every song you play, but we can't help but wonder if the band is getting a little bored of playing the same songs night after night.

"Are you aware there are thousands of fans just like us who have spent months discussing the Black Ice World Tour setlist, every one of them hoping that the band will play something other than songs geared towards casual fans? - the sort of fans that put money in your pockets, but who don't have the same level of passion for your music as us.

"They may cheer at the concerts, they may go home happy...but they only came to hear Thunderstruck. They don't eat, sleep and shit AC/DC like we do.

"As the greatest band on Earth, we think it is a travesty that you are not playing songs that are dear to yourselves and your long term loyal fans - the songs from albums that critics wrote off, but which we both know are some of the finest from your back catalog.

"So, we'd like you to consider changing the setlist. We won't be rude and say 'play this' or 'don't play that' - we'll leave it to you to decide - surprise us!

"Please give us, and the many thousands like us, some hard hittin', heavy rockin' tracks that we, the true long term fans of AC/DC, know and love."

If you're just a wee bit curious, here are the songs AC/DC been playing - in the same order it seems - on the Black Ice Tour.

OK, so it's not godawful. We could do without War Machine and Big Jack, that's for sure. And a little Walk All Over You would go down just fine. (Hey, we don't mind telling the band what to play!)