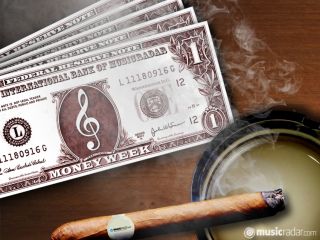 To round-off our wealth of Money Week features, here's a playlist comprising some of our favourite odes to the dollars and cents that make the world go round. First up, well, it's obvious, isn't it?

In case you missed it in the title, the song's loop of coins clinking and ringing cash register sound effects is an extremely literal reminder of the subject matter of A Dark Side Of The Moon's most accessible moment.

Of course, this is Pink Floyd in 1973, so 'accessible' comes in 7/4 time and clocks in at nearly six and half minutes in length. Money switches to 4/4 during the guitar solo, apparently to make things 'easier' for David Gilmour.

The Beatles - Money (That's What I Want)

Barrett Strong's 1959 single on Tamla was the first big hit for Berry Gordy's empire and has been much-covered over the years, but The Beatles hit the nail squarely on the head in 1963 with this blistering version that closes their second long player and features one of John Lennon's finest rock 'n' roll vocal performances.

Just months later, McCartney would pen the song's spiritual flipside in the shape of Can't Buy Me Love, while 1969's You Never Give Me Your Money would see the group return to matters of finance - a poignant reference to the business tensions that were tearing the band apart.

It would be rude of us to talk about money without giving a nod to Lil Wayne. Everything the guy does is money - from his Young Money stable of artists to his constant financial bragging.

Hell, he's even got so much money that he's paid to have AutoTune surgically installed into his voice box (or at least it sounds a bit like that to us).

We've picked Got Money here, as it's probably his most obvious money-related cut, but we could pretty much have picked any Weezy song at random and it would be sure to have at least a line or two about making mad dollar.

Kanye's Gold Digger is a money-themed classic. It's that age-old tale of hardship - you've made so much mad cash from your massively successful rap career that you worry that woman only want you for one thing. We've all been there right?

A special nod goes to Ray Charles' I Got A Woman, which Gold Digger samples, with Jamie Foxx doing an excellent Charles impression. I Got A Woman is a classic money tune in it's own right, and just an all-round great record.

The Smiths - Paint a Vulgar Picture

From 1987's Strangeways, Here We Come, this was neither the first nor the last that Morrissey would take a swipe at the lengths that the music business's "sycophantic slags" will go to in order to make money. It was, however, the most poignant.

While the railing against the constant drive to "Re-issue! Re-package! Re-package!" may be somewhat ironic, given the number of Smiths compilations out there - after all, "you could have said no, couldn't you?" - this is above all a razor-sharp exploration of the pains and pitfalls of music fandom.

The Valentine Brothers - Money's Too Tight To Mention

No, not Simply Red's 1985 cover, but the original version by US soul duo The Valentine Brothers, who also wrote it. It's possibly the only song ever to reference Reaganomics, the catch-all term used to describe the economic policies of the former US president.

The track doesn't get too bogged down in fiscal matters, though - in fact, economic hardship has never sounded quite so funky.

If we owed Ol' Dirty Bastard money, we'd probably pay up sharpish. That said, we'd never have borrowed the cash in the first place, if we have one rule of thumb here at MusicRadar it's this: never get financially involved with a mentally unstable crack addict.

We jest, of course, Baby I got Your Money is a stone-cold hip-hop classic from a sadly missed undeniable legend. (Yes, we are worried that is ghost is going to swing by our office and rough us up). RIP ODB. Huge tune.

This 1976 single might have ended the Swedish pop powerhouse's run of three consecutive number ones in the UK - following Mamma Mia, Fernando and Dancing Queen - but we're guessing Benny Andersson and Björn Ulvaeus got over it by wiping their tears away with 1000 krona notes...