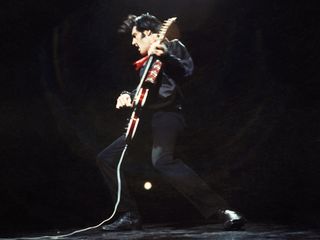 On 8 January 1935 The King Of Rock 'N' Roll was born. Musician, actor, sex symbol and cultural icon, Elvis Presley may have died tragically young at 42-years-old, but his legend is still as strong and alive as it was 75 years ago.

Today, MusicRadar is bowing a head to The King with a fitting factathon: 75 things you didn't know about Elvis. But wait, hold your darn horses all the way back to Graceland. Why have we only listed 74?

We need you to tell us the rarest, juiciest and downright eye-brow raising fact(s) you know about Elvis Presley. We'll populate the number 75 spot with the craziest quote and, best of all, the winning fact-finder will receive a special Elvis 75 US box set (plus four UK box sets for the runners up).

So, sit back, pull down your golden shades and Take Care Of Business by reading on and letting us know what we missed. Scroll through to the end for details on how to enter…

75 things you didn't know about Elvis

1. The King Of Rock 'n' Roll's full name is Elvis Aaron Presley, although for many years Elvis assumed his middle name was spelt Aron (that's what it says on his birth certificate, after all).

2. It wasn't until Elvis sought to officially change it to the more traditional spelling that he learnt that, despite the document, state records did indeed already have him registered as Elvis Aaron.

3. When Elvis was at Humes High School, he was on the boxing team. His favourite class was wood shop.

4. Elvis's first guitar cost $7.75 (plus 2% sales tax) from his home town's Tupelo Hardware Company. His mother, Gladys, helped him buy it for his 11th birthday.

5. On Thursday 7th January, the first of 14 six-foot public art replicas of Elvis's first acoustic will go on display outside the store as part of the 75th birthday celebrations.

6. Apparently, though, Elvis would have preferred a 22. cal rifle.

7. The gun obsession did continue, however. Elvis had a collection of 40 weapons (including sub-machine guns) and was honoured with a Smith & Wesson signature revolver (the TCB Tribute) in 2007.

8. As a youngster, Elvis idolized gospel group The Statesmen. According to Elvis's back-up singer Joe Moscheo, Elvis's dance moves were inspired by James 'Big Chief' Wetherington (The Statesmen's bass singer), who was famous for his leg twitching.

9. Splash it all over! Elvis's favourite aftershave was Brut.

10. Elvis's first recording at Sun Records was self-funded in August 1953. He cut a two-sided acetate: My Happiness and That's When Your Heartaches Begin.

11. Elvis claims the record was a gift for his mother (bless). Cynics say he chose Sun Records in the hope of being discovered (far cheaper, amateur recording facilities were available nearby).

12. In 1954 Elvis auditioned for a place in gospel quartet The Songfellows. The band rejected him because "he did not demonstrate an ear for harmony at the time."

13. Sun Records boss Sam Phillips's first session with Elvis later that year spawned a cover of Arthur Crudup's That's All Right Mama. The recording was picked up by Memphis radio DJ Dewey Phillips who, following a flood of listener calls demanding to know who the singer was, played it repeatedly for two hours.

15. Like all good guitar gods, Elvis owned a chimpanzee. His name was Scatter.

16. Elvis's television debut was on Louisiana Hayride. Filmed in Shreveport, Louisiana, he appeared on 5 March 1955.

17. Prefer a different nickname to The King or the Hillbilly Cat? In September 1955, Country Song Roundup magazine was the first to feature Elvis, tagging him a "folk music fireball."

18. Are You Lonesome Tonight? was written in 1926 (music by Lou Handman, lyrics by Roy Turk). Of the many versions recorded, one of the first versions to feature the 'spoken word bit' was Al Jolson's (recorded in 1950). Like Jolson, Elvis took his 'speech' from Jaques speech on Act II Scene VII of As You Like It.

20. It's not just The King's birthday today. Elvis shares a birthday with David Bowie and Doors guitarist Robby Krieger (both fellow Rock and Roll Hall of Fame members) as well as legendary promoter Bill Graham.

21. During his two-year stint as a Private in the US Army in 1958, Elvis donated all his pay to charity.

22. Elvis also supplied the base with numerous television sets and brought an extra set of clothes (supplies were meagre) for each of his fellow privates.

23. Elvis was a black belt in karate - he was introduced to martial arts while in the army.

24. Unfortunately, he was also introduced to amphetamines.

Elvis as a boy with his parents Gladys and Vernon, 1937 © Michael Ochs Archives/Corbis

27. Another deal was struck with Hill And Range Publishing whereby the company's songwriters had to give up to a third of their royalties in exchange for the kudos of having a song recorded by The King. Because of this, Elvis was given several false co-writing credits.

28. In fact, Elvis recorded more than 600 songs without writing any of them.

29. Being The King, Elvis rightfully had an entourage (aka the Memphis Mafia). Elvis gave each member a gold ring inscribed with a thunderbolt and the letters TCB (Take Care Of Business).

30. The Memphis Mafia loved their matching rings - but not as much as Elvis who was buried in his!

Elvis and Ann-Margret driving a stockcar in a scene from Viva Las Vegas, 1964 © Bettmann/CORBIS

31. From the time they met right up until his death, Elvis always sent a roomful of flowers to Ann-Margret whenever she opened up a show in Las Vegas.

32. Elvis was a Deputy Sheriff in Shelby County, Tennessee.

33. Elvis purchased over 100 Cadillacs in his lifetime, many bought as gifts for friends and family. The very first Cadillac he ever bought was pink, and was purchased as a gift for his mother.

34. Elvis met with Led Zeppelin's Robert Plant and John Paul Jones in 1973. Plant was so awestruck at meeting his idol that he could barely speak whilst a similarly-awestruck Jones could only make small talk, commenting on Elvis's beautiful watch. Elvis instantly traded said $5000 gold and diamond watch for Jones' $10 Mickey Mouse watch. This broke the ice with all of them, and they became good friends.

Elvis and Priscilla Presley getting married on 1 May, 1967 © Bettmann/CORBIS

35. According to Irena Chalmers's The Great Food Almanac, the last food that Elvis ate was four scoops of ice cream and six chocolate chip cookies.

36. Charles Bronson starred alongside Elvis in Kid Galahad (1962). It was rumoured that the two didn't hit it off.

38. The self-titled debut LP, Elvis Presley, was the first rock 'n' roll album to make it to the top of the Billboard charts in the US.

39. Elvis's debut was also the first million-selling record in the genre, spending ten weeks at number one in 1956.

40. Elvis is a honorary Member of the Tau Kappa Epsilon fraternity.

41. Elvis thought that The Beatles represented 'anti-Americanism' because of the Fab Four's open drug use. He shared these thoughts with President Nixon in 1970.

42. …it didn't stop The Beatles' hits Yesterday, Something and Get Back becoming a regular on The King's concert set-list during the 1970's. And, as Paul McCartney said afterwards: "The great joke was that we were taking [illegal] drugs, and look what happened to him."

43. …regardless, Nixon gave Elvis a special agent badge for the Bureau Of Narcotics And Dangerous Drugs (The King collected badges, you see).

44. Elvis's ancestor winegrower Johann Valentin Pressler emigrated to North America from Niederhochstadt (now Hochstadt), Germany in 1710. Pressler first settled in New York, but later moved to the South. Sometime during the American Civil War, Pressler was anglicized to Presley by a Pressler serving in the Confederate Army.

Elvis isinducted into the Los Angeles Tribal Council by Chief Wha-Nee-Ota for his "constructive portrayal of a man of Indian blood" in Flaming Star. 1960 © Bettmann/CORBIS

46. It was another Geller (Larry - no relation to Uri) who helped introduced Elvis to the studies of religion and mysticism by supplying him with books which the singer "read voraciously." Larry Geller was Elvis's hairdresser.

47. In fact, two of Elvis's favourite books were The Impersonal Life by Joseph Benner and The Bible.

48. Resident at Graceland was Elvis's grandmother, Minnie Mae Presley. She outlived her son and grandson, passing away in 1980 at the age of 86.

49. Graceland is the second most-visited house in America. The first is the White House.

50. …Graceland was declared a National Historic Landmark in 2006.

52. Kurt Russell's film debut was an uncredited role in Elvis's 1962 musical It Happened At The World's Fair. His character kicked Elvis in the shin.

53. …coincidentally, Kurt Russell played the part of Elvis in three other films: he supplied the voice of Elvis in Forrest Gump; appeared as an Elvis impersonator in 300 Miles To Graceland; and played The King himself in the 1979 made-for-TV film, Elvis.

55. Alongside James Dean, John Wayne, Clint Eastwood and Steve McQueen, Elvis loved Marlon Brando. Unfortunately, it wasn't reciprocated as Brando strongly disliked the King. "It seems to me hilarious that our government put the face of Elvis Presley on a postage stamp after he died from an overdose of drugs. His fans don't mention that because they don't want to give up their myths. They ignore the fact that he was a drug addict and claim he invented rock 'n' roll when in fact he took it from black culture; they had been singing that way for years before he came along, copied them and became a star." Ouch!

Elvis on the Set of Blue Hawaii, 1971 © Michael Ochs Archives/Corbis

56. Elvis first auditioned as singer for country band the Starlite Wranglers. It didn't work out so he took most of the band for himself - namely guitarist Scotty Moore and bassist Bill Black. Thus the soon-to-be-renamed Hillbilly Cat and The Blue Moon Boys were born…

59. In 1973, more people watched Elvis: Aloha From Hawaii than watched Neil Armstrong walk on the moon.

Elvis with Princesses Margrethe of Denmark, Astrid of Norway, and Margaretha of Sweden (l-r) © Bettmann/CORBIS

61. Following a concert in Wisconsin during The King's more 'energetic' performing era, the local Catholic diocese wrote to FBI director J Edgar Hoover, warning that Elvis Presley "is a definite danger to the security of the United States... [His] actions and motions were such as to rouse the sexual passions of teenaged youth."

63. White Christmas composer, Irving Berlin, was so disgusted with Presley's "profane parody" of his beloved Yuletide standard on Elvis' Christmas Album that he demanded that the song (and all subsequent album tracks) be banned from radio play. He was mostly ignored.

65. The last film Elvis saw at the cinema was The Spy Who Loved Me. The last song he ever performed in public was Can't Help Falling In Love.

66. Still at the movies, Elvis tried to get a print of Star Wars to show his daughter, Lisa Marie Presley, the day before he died.

68. Elvis's favourite impersonator of himself was the late American performer/actor Andy Kaufman.

69. Unlike The King himself, Kaufman would ask his audience to return the items of clothing he'd tossed at them during the show.

70. In 2009, Elvis was the fourth top-earning dead celebrity according to Forbes. He earned $55 million.

73. The Junkie XL remix of A Little Less Conversation (Elvis Vs JXL) adopted by Nike for its 2002 FIFA World Cup campaign topped the charts in over 20 countries.

74. Following the success of the Rage Against The Machine/Christmas number one campaign, someone called 'Dave' has set up a Facebook group called let's get Elvis to #1 in his 75th year. The proposed track is Just Pretend.

If you know an amazing piece of Elvis trivia that we've overlooked, let us know. The winning fact-finder will get their name in lights right here and receive an Elvis 75 box set. So, double check that we haven't already mentioned it and share your knowledge, like this: