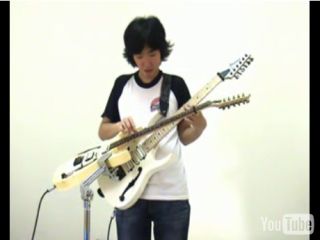 Why play the theme on one guitar if you can do it on two?

It's been announced that The Simpsons has been commissioned to air for at least another two seasons, which will make it the longest-running prime-time show in US TV history.

To celebrate this fact, we've picked out six alternative versions of Danny Elfman's iconic Simpsons theme song. Decide for yourself whether any of them are better than the original.

Soundtrack legend Hans Zimmer may have composed its score, but Green Day were responsible for reworking The Simpsons theme when the show was expanded into a movie in 2007. It was also released as a single.

2. The Fall Out Boy version

Before we delve into some of the more obscure takes on The Simpsons theme, we should mention that the Illinois emo rockers have also covered it. As you may know, the band took their name from another Matt Groening creation, Fallout Boy, who appears in his Radioactive Man comic book. You can watch 'The Boy' talking about recording the theme here.

If it's virtuosity you're looking for, check out South Korean guitarist Zack Kim's take. Played on two guitars, we dread to think how long it took Zack to master it, but the clip is fully deserving of the 8.7million-plus views that it's managed to rack up on YouTube.

Released back in 1992, Mario Paint was an art package for the Super Nintendo console. One of its hidden mini-games was a music composer, and versions of this have since been released for Mac and PC. Countless tracks have been recreated in the software, and The Simpsons theme is one of them. Thanks to the use of a SoundFont sample bank, this features better sounds than were included in the original Mario Paint.

A musical calculator might sound like a concept that should never have made it off Casio's drawing board, but if it hadn't, we wouldn't have had this bleepy homage to the family Simpson. If you were an accountant in the '80s, those long days must have just flown by…

Spot-on timing is crucial to the success of this chiming cover, which was played by Arizona's Bourgade Catholic High School Bell Choir. Extra marks are awarded for the fact that all members of the ensemble seem to be wearing what appear to be dedicated handbell players' gloves.