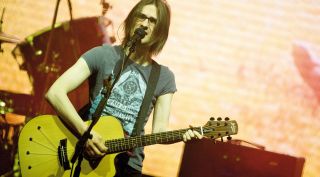 Got my first real six-string…

"My very first guitar was a nylon-string classical that my parents bought me, thinking they could get me lessons and I'd learn to play. But of course, being eight years old at the time, I hated it and rebelled against it.

"A couple of years later, my Dad gave me this old reel-to-reel tape machine and I got the guitar out of the attic and started to experiment with recording and manipulating sound. The fi rst thing I learned wasn't how to play Louie, Louie but how to make weird sounds."

A saucerful of secrets…

"The best advice I got was just from listening to records. I was never attracted to virtuoso guitar players, I was more attracted to the players that have a unique musical vocabulary, whether that be Robert Fripp, Keith Levine in Public Image Limited, or Robert Smith in the Cure. It was always those players who had something unique about their sound, their style or their approach to the music. That was the education I got from listening."

"One of the great things about working with other musicians and guitar players is that they take you out of that comfort zone. Look at David Bowie. He was a master at choosing unusual collaborators. He was always the same artist, but the musicians and the scenery around him were always changing.

"That's one of the benefits of being a solo artist and being able to evolve in your own way - you're able to reach out to different collaborators. It keeps you fresh. I think that's been fundamental to my decision to be a solo artist."

Win some, lose some, it's all the same to me…

"I'm a great believer that if you are an artist - it's quite a pompous word, but let's go with it - you do the art for one person and one person only, which is yourself. You cannot be thinking about your fans, your manager, your record company.

"You have to create the art in a vacuum... If you're not doing that, then you have become an entertainer - and there's nothing wrong with that. [But as an artist] you're always going to disappoint some fans, and part of being an artist is being prepared to accept that you will lose fans and you will gain new fans."

"I've seen so many people in print, on the internet, or even to my face say, 'Why are you so depressed?' And you know what? I'm the opposite! My music is very melancholic, but the reason I'm so happy as a person is that in a way I'm able to channel that side of me. When people see me grinning my way through shows, it's like they're in shock!

"The artists I know that make the darkest music, whether it's death metal, or industrial, they always tend to be the nicest people. Then you meet these hip hop DJs or pop artists and they're the biggest assholes. I'm generalising, of course!"

Things we lost in the fire…

"My father, who's passed away now, was an electronic engineer - and when I was young he made me all these instruments, like a vocoder, a delay machine, a little four-track portastudio. There was one thing, in particular, this sequencer and it was amazing. It had its own personality and it was totally unique to the way my Dad thought about it.

"I lent it to a friend and, as you do when you're a teenager, fell-out with the friend and never got it back. I would love to have that back. It just connects with my memories of my father and my nostalgia for that time, but it's also an extraordinary piece of gear."

Steven Wilson co-headlines the Be Prog! My Friend festival in Barcelona with Opeth on 1 and 2 July 2016