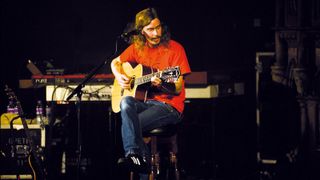 Opeth's visionary guitarist and frontman Mikael Åkerfeldt tells us all about Strat doodling, sock denial and setting the record straight on his reputation.

I got my first real six-string...

"My first guitar was an acoustic, a classical by Levin, that I got from my grandmother. At the time, I was into metal music so I wasn't really happy with an acoustic guitar. But she gave me some chord books, things like House Of The Rising Sun and some Beatles songs, I remember.

"My first electric was a Les Paul... Well, it looked like a Black Beauty. I bought it for £40, so it obviously wasn't the real deal!"

"I used to draw pictures of Strats when I was young, with the big 70s headstocks because of Yngwie and Ritchie Blackmore. I thought they just looked cool and still do to this day. I don't draw them now, but I've bought quite a few of them.

"I got a copy first, a Session that was grey with a white pickguard. I remember I thought it sounded like shit, it didn't sound metal at all. But they don't.

"And I also remember I thought it sounded muddy because I hadn't figured out there was a pickup selector switch! I plugged it in and I had it on the neck pickup all the time. I was thinking, 'What's this shit?!' I didn't think of changing the pickup."

Just a castaway, an island lost at sea...

"I got PRS to make me a Modern Eagle. It was when they still had the Brazilian rosewood. They made me a single-cut, 24-fret Modern Eagle and it's a great guitar. It's unique, too. It was also the blueprint for my signature model. So I'd probably take that to a desert island.

"But then again, on a desert island there's no electricity. So maybe I'd want an acoustic guitar. I have a PRS Angelus acoustic and a Ramirez 1A. I love those guitars, so either of those two."

"I've made some changes to my rig and am using the JVM Satriani Marshall model and a Voodoo Lab Ground Control switching system. I've got the miniature [Electro-Harmonix] Small Stone pedal, which I love, an MXR Carbon Copy echo, Strymon reverb, MXR Uni-Vibe... I don't use that much, but it sounds really nice.

"I've got a PRS P24 with a piezo pickup, too. Fredrik [Åkesson, guitar] and I are using piezos for the first time. It's like having a really easy-to-play acoustic guitar onstage that sounds nice, and also a tremolo."

"The best advice I've ever had as a musician? A real musician doesn't take advice."

Far beyond the sun...

"We played the Maldives, in Malé. There were lots of women in full niqabs headbanging. It was weird in a really good way because we didn't know if anyone there had even heard of us. It was fantastic."

"When you're Swedish born and raised it comes with some kind of limit of how extravagant it allows you to be. Besides, we don't have any wishes for what we'd want on a rider besides some wine, beer... I think we asked for socks once, and didn't get them!"

"I have a reputation for being like a tyrant and an egomaniac. I'd like to think I'm no more of an egomaniac than the next guy.

"It depends if you're talking about the guy in the band or when I'm not doing the band, because I'm different [away from the band], I'm much more withdrawn. Borderline antisocial.

"But as a band, we're right there - people can meet us. We're not like Led Zeppelin back in the day. We go to the pubs and hang out. There's not a great deal of mystique."