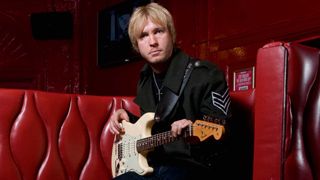 "It was always the guitar that spoke to me. When I saw Stevie Ray Vaughan for the first time as a kid, it changed my life and lit the fire inside of me, to get my first real guitar. The Yamaha SE-150. It was shaped like a Strat, made out of crappy plywood. My family didn't want to invest in an expensive guitar for a seven-year-old.

"Just a few years later, I got my very first Strat, and that guitar was later autographed by Stevie Ray, just before he passed away. He said, 'Hey man, you keep playing this thing and maybe one day we'll get a chance to play together.' Of course, that day never came."

The kids are alright…

"As a kid, all my friends would be outside, and I'd be inside playing guitar all day - for hours and hours and hours. But I don't think I ever sacrificed anything, because that's all I wanted to do.

"The first time I got onstage, when I was 13 years old, people were looking at me like, 'What does this kid know about the blues?' But the minute I would start playing, it was like the walls came down. Music helps people to find common ground. It opens the door."

Three is the magic number…

"Chemistry is the one thing you can't fake. It's either there or it's not. The Rides was just supposed to be an experiment, y'know, get together, jam a little bit and see what happened. But the chemistry between me, Stephen Stills and Barry Goldberg was immediately apparent.

"Now we're on our second album. Stephen and I, we share the guitar responsibilities across the board - the rhythms, solos and fills - and we've learnt how to weave in and out of each other's playing. It's a great dynamic, and we really push each other."

I want it all…

"As a professional musician, I want as many tools as I can get. Fender has been very good to me, but hasn't restrained me, even though I'm a signature artist. On Pierced Arrow, I brought in my '59, '58 and '61 vintage Strats, my signature Strats and a couple of my Custom Shop Strats that Todd Krause built for me.

"But then, Stephen has got a vintage Gibson Super 400 that I played on a few songs, that just sounded really great, and I played a Les Paul on a few songs as well. Between us, we had no shortage of great instruments available in the studio."

The show must go on…

"When things start to break down live, that's what separates the men from the boys. Any time that something blows up, it's not a fun gig. Last year, I had a couple of amps that literally burnt up onstage. Like, I had an electrical fire and smoke was billowing out of them.

"On the spot, you have to adapt and troubleshoot, and there's a lot of really fast thinking that has to happen - while you're still trying to entertain the crowd and not make a spectacle out of the whole thing."

Can you feel it?

"It's probably one of the biggest misconceptions that it's easy to play the blues. Bass players, guitar players, drummers - I think all musicians underestimate blues music and dismiss it as a simple genre that's easily played. But it's actually so complex to master and to do it properly. Because it's all based on feel, and it really comes from the inside-out.

"You take a guy who thinks that the blues is really easy and stick him up there onstage with guys who play the blues on a regular basis. You'll soon find out who the imposter is…"

Kenny Wayne Shepherd: my top 5 not-so-guilty pleasures of all time