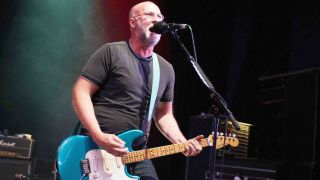 We chew the fat with the Hüsker Dü and Sugar legend as he releases 12th solo album, Patch The Sky…

"The first guitar that I got was a Sears SG copy and that was probably when I was 15 or so. I thought I wanted to be a guitar player but I don't think my dad wanted to spend more than 80 bucks on this new endeavour. So I got this very poorly set-up guitar in the mail and the action was terrible, and it was really hard to learn on but I did.

"I played that thing to death for a year and then my dad saw that I was serious so we took a 30-minute drive over to a nearby college town that had a music shop. The best guitar that was in the price range was an Ibanez Rocket Roll Junior Flying V… and that's pretty much how the Flying V became the guitar of choice for that first part of my career."

"The guitar sounds on [Patch The Sky] are so dense. I spent the first half of last year just writing this record and recording a lot of demos at home, using a lot of room mics on a smaller Blackstar amp. I was getting this really big thick sound out of everything I recorded.

"And so my engineer at the studio was like, 'How are you getting those sounds on your demos?' I said, 'Well, I'm using this Coles ribbon mic and another boom-y mic up close on the amp and then this other vocal mic just sitting open.' He said, 'Well, let's just go for that!' It's probably the biggest straight-up sound that I've used since [1990 album] Black Sheets Of Rain."

Look for the bare necessities

"I arrived at my basic style of playing out of necessity, starting with Hüsker Dü and being in a three-piece. I had to cover a lot of space with one guitar, and I guess it goes back to the way that Pete Townshend approached things with The Who, having to ring open notes to cover more harmonic space.

"As time went on, I was introduced to people like Richard Thompson who uses a lot of different tunings with his style. The Byrds did that, too, and even Joni Mitchell was using more of those almost dulcimer tunings where everything might be in a root in the 5th, so you can have more drones going on. Then there was stuff like Hendrix, Johnny Ramone, Johnny Thunders. I was taking all that kind of stuff and wrapping it up together."

If you start me up I'll never stop

"I was a self-taught guitarist until I got to Minnesota right before Hüsker Dü started. I took two guitar lessons from a fella named Chris Osgood, who'd played in a band I liked called The Suicide Commandos. I only saw them a couple of times, but then they broke up and Chris started giving guitar lessons.

"At the end of the second lesson, he actually gave me the best advice ever. He just looked at me and said, 'There's really nothing more I can teach you. You just need to keep writing songs. Start a band right away!'"

For all the cows

"The strangest gig I've ever played would probably be with Hüsker Dü in '83 or '84 at this huge agricultural hall in Norman, Oklahoma. It was almost like a place where they'd hold an indoor rodeo or have a state fare with chickens and pigs and people judging cows on their beauty! It was just the space and the way that everything sounded in the room and the way the crowd was reacting that was unusual.

"I remember we finished by playing one chord or note over and over for a long stretch of time, maybe half an hour or something. It was the weirdest, funniest gig."