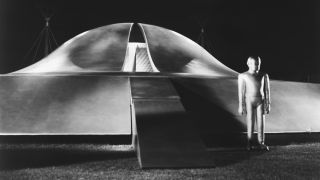 We scour the galaxy for the greatest space-songs in this (or any other) dimension (Image credit: John Springer Collection/CORBIS)

We scour the galaxy for the finest space-inspired music ever created - but what have we missed?

Punk compilation fave recorded by new wave one-hitters Spizzenergi. Described by John Peel as "the only Star Trek tribute worthy of the Enterprise's jukebox" (to be fair, it's not an overcrowded market), the band went on to release two more Trek-inspired songs, Spock's Missing and Five Year Mission (Featuring the Return of Spock) to a universal shrug of indifference.

Queasily jaunty Star Trek tribute of the kind favoured by male virgins who wear 'fun' ties, this was a jumbo-sized novelty hit in 1987, spending an eyebrow-raising nine weeks at the top. Former Bucks Fizz producer John O'Connor, incognito as The Firm, was the guilty man.

The KLF, masquerading as the Timelords, unleashed this gleefully dumb but catchily stompy Gary Glitter-Sweet-Doctor Who mash-up in 1988. Despite a video that looked like it was made in a lunch hour and the band's Bill Drummond calling it "probably the most nauseating record in the world", it rapidly sped its way, somewhat unfathomably, towards number one.

Following on from their Hitchhiker's Guide To The Galaxy-referencing Paranoid Android, this second cut off the already SF-skewed OK Computer concerns a loner fantasising about being abducted by aliens. We can only imagine Thom was in a very dark place at the time…

The video features the ever-ageless hip-hop kooks running from a giant robot monster and the track samples music from z-movie curio The Toxic Avenger - what's not to love?

Spurred by the July 1969 moon landings as well as Stanley Kubrick's then super-hip 2001: A Space Odyssey, this Dylan-goes-cosmic cut landed Bowie an Ivor Novello award in '69. A moderate hit in the UK, but a colossal failure in the US, it marked the first mention of Major Tom, a fictional astronaut whom Bowie would revisit in Ashes to Ashes in 1980 and Hallo Spaceboy in 1996.

Inspired by a short story by SF literary giant Ray Bradbury, Reg Dwight and Bernie Taupin's searingly sentimental ballad about a Mars-bound astronaut's feelings at leaving his family on Earth is a thumpingly powerful reminder that Elton John actually was - once upon a time - really quite great.

Sumptuously ELO-like pop-rock nugget about alien abduction. In the song, the guy thinks he's going to see the universe, but is disappointed when the aliens plonk him back down to Earth. Worth it for the video - which bears hardly any relation to the song - where Brandon Flowers walks around dressed as a dickhead.

Musically, it's a shameless Pixies rip-off, but lyrically, Buck Rogers is barely nudging Junior School-level poetry. "Got a house in Devon," they warble in their stupid, indie-landfill way, "Drink cider from a lemon." It's enough to give Frank Black a coronary.

Zeitgeist-seizing single from one-time Welsh indie faves Catatonia. For anyone under the age of 25, Mulder and Scully were the leads in The X-Files, which your older sister probably once thought was, like, the coolest show evah. The song has the titular duo investigating not alien grays or stretchy vent men this time, but… love. (Pass the vom sack.)

A fittingly (but also unbearably) synthy big hand to the neo-noir SF movie classic, this 1984 cut from Kim Wilde sounds less like a tribute to the heady speculative prose of Philip K Dick or the painterly visuals of Ridley Scott, than a trembly-legged lust letter to Harrison Ford.

The flipside to their 1975 Venus & Mars/Rock Show, this was Macca delving into the Marvel Comics universe for a song about two of The Avengers' costumed superbaddies. It's no Mull of Kintyre, fortunately.

Pop Will Eat Itself - Can U Dig It?

Anthrax - I Am The Law

Judge Dredd's nail-hard, outlaw-strewn future world was always going to appeal to leather-loving metalheads, so it was no surprise when Anthrax penned this love-fuelled tribute to 2000AD's stubble-jawed lawman, complete with references only the most hardcore fankids would get.

Three-chord comedy tribute to the original Star Wars trilogy by short-lived, small-brained San Diego punk outfit Jon Cougar Concentration Camp. Does contain the lines, "Yoda didn't wanna teach him / He could see Luke was a schmuck / When he found out Leia was his sister / He lost a potential fuck," which has a kind of retarded genius.

Man or Astroman - Invasion of the Dragon Men

Sci-fi-obsessed surf-punk from the early 90s, you say? We've got just the thing. Man or Astroman emerged from Alabama, but founder members Star Crunch, Birdstuff and Coco the Electronic Monkey Wizard claimed to have been sent from outer space specifically to reeducate the world in the ways of surf music. Fair enough.

A wickedly perverse and woozy love track from Nottingham-based electronica misfits Bent from the point of view of Battlestar Galactica's robotic antagonists. Mind you, given lead Cylon Tricia Helfer, maybe it's not so odd.

Wow, imagine the days when a pop song based on the work of visionary SF loonball Philip K Dick, could end up on Top of the Pops and stay at number one for four weeks. Sugababes lifted the main hook for their smash hit Freak Like Me, but rumours of an imminent cover by One Direction remain, thankfully, unfounded.

Not many pop songs run the course of 10,000 years in their modest three-minute form, but Dennis Zager and Richard Evans' (couldn't you have come up with a band name, guys?) 1969 hit does it with a mounting sense of grandeur. Brilliantly covered recently by Mr Ian Brown.

Few have laid bare their fuzzy-headed belief in alien beings and UFO conspiracy theories more than Pixies-era Black Francis. A typically nutzoid lyric tale of an alien crash-landing on Earth, Motorway to Roswell featured on the band's sayonara album, Trompe le Monde. Maybe if he'd shut up about extra-terrestrials just a little bit, Kim Deal might not have walked.