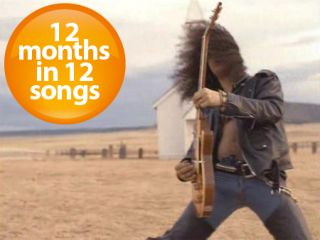 Slash. A desert. An unplugged Les Paul. It can only be the November Rain video.

It's nearly October. Or 'Rocktober', as we never say here.

Even so, MusicRadar set itself a challenge. Could we soundtrack every month of the year with great tunes?

Well, you can certainly find 12 January-December tunes. Whether they are 'great', we'll leave you to decide. Roll on a calendar of music...

They spent three weeks at the top of the UK charts in erm, February 1975, but not many people remember Pilot. That said, there is a double-neck Gibson in the video, and the band were on the soundtrack of Adam Sandler's excellent golf comedy Happy Gilmore in 1996.

Here's an 'acoustic' version of the track from Foo Fighters' '97 album The Colour And The Shape. That's better.

Darth Vader's theme music reinvented through Dutch symphonic metal. Feel the power of the dark side of the force right here. (Okay, we struggled with March.)

What a weird band JAMC were: shambling guitar-fuzz melded with retro soul-pop melodies shouldn't work. Somehow, however, this does.

Blue Öyster Cult - Then Came The Last Days Of May

Blue Öyster Cult deserve kudos for inventing the superfluous umlaut in metal band names. And for having a guitarist (singer here, too) called Buck Dharma - which if you mispronounce as Duck Bharma makes you at least think he's nice to animals. Weird band. Another track on their debut album was called She's As Beautiful As A Foot. But of course!

More cowbell! Oh no, actually don't bother. And the maracas aren't great either. Are there better songs with June in the title? Please?

July was used as the theme tune to Lock, Stock… No, not Guy Richie's blockbuster Lock, Stock And Two Smoking Barrels - but the spin-off TV series. Regardless, the oft-mocked 'dad rockers' are in thanks to the lyric "and June becomes Juuuuuuuulllllllllllllllllyyyyyyyyyyy."

Counting Crows - August and Everything After

The album of the same name was released in 1993, but this song wasn't actually heard until more than a decade later when the band played it live.

None more '70s. It's a great song though, from an undervalued funk band. A few years later, half of EWF were backing Phil Collins. Just how mad is pop music?

Before the crack/divorce/media car-crash took over, there was this. It's from Winehouse's 2003 debut album Frank, when you could see what the fuss was about.

Quite possibly the most overblown single-release ever: a kind of Stairway To Nowhere. Looking back, was this the beginning of the end of GN'R?

Shortly before Kate Bush retired from any public performance, she actually had her own Christmas Special TV programme on the BBC. Is she loveably eccentric or just plain bonkers? Who still knows?