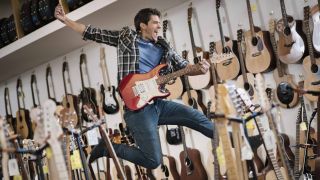 WORLD GUITAR DAY 2019: The world is full of awfulness. You know the sort of thing - war, economic hardship, The X Factor. Basically, a whole tsunami of bad stuff beamed directly into your face by whichever glowing rectangle you've decided to stare at today.

With all that going on, it can be hard to stay positive - and yet there's hope. For no matter how bad things get, guitarists are blessed. For the guitar is the single greatest musical instrument ever conceived, and we get to play it.

No matter how bad the conflict, how crippling the depression, how overwhelmingly awful the new Bieber single, we shall persevere. Because it is awesome being a guitarist. Here's why…

Your commute was awful, you spilled coffee on your crotch, and your boss was a classically trained bastard for nine straight hours. When you've had a day like that, there is no better medicine than plugging in a guitar, turning it up, and making a huge amount of noise.

Playing guitar is, in our experience, the most effective method of staying sane in a world that can appear to be actively trolling you. Like extremely loud yoga, playing the guitar clears your mind and gives you an enormous sense of peace. So, hooray for that.

2. The feeling of achievement

How do you feel when you've finally conquered a particularly tricky solo, or written a great song, or had a great jam? Like a great big sexy genius, that's how.

We can all remember the first time we nailed the intro of Sweet Child O' Mine, or Layla, or whatever your classic rock song of choice was when you were but a wee slip of a beginner. Many among our parish have spent the rest of our lives chasing that same feeling. Why? Because it makes you feel good about yourself and it's a whole lot of fun, that's why.

3. It makes you smarter

It turns out that learning things makes you smarter. Who knew? All those hours spent playing along to records or correcting rubbish internet tabs has actually made your brain… better.

Learning the guitar can actively improve cognition, aid hand-eye coordination - hell, it can even add points to your IQ.

Being a guitarist means that you are always learning, constantly teaching your brain to do new, intricate things, consistently pushing yourself. It's almost as if playing the guitar makes you somehow superior to other people…

We've said it before and we'll say it again: getting in a room and making a racket with friends is one of the best things you can do as a member of the human race.

Getting a band together, writing some songs, playing a few gigs - whether you have success or not, these are things that every guitarist should experience, if only for the sheer joy of ripping out a solo at full volume in a space that isn't your bedroom.

Practising in a garage is among the most fun things on Earth, and playing live? Well, it's as addictive as any drug (probably), and one of the most exhilarating, terrifying and downright exciting things you'll ever do in your life.

5. You learn the value of perseverance

What was the most difficult thing you ever learned? It took bloody ages, didn't it? Poring over it second by second, painstakingly learning each note, slowly linking them up, working on your phrasing and timing and tone, then blending all that together to form a coherent whole - learning a piece of music is an enormously complex task.

But you've done it, time and time again, and you are an Advanced Human because of it. You've learned that you're capable of achieving things that at first blush seem impossible. All it takes is time, patience and perseverance. If that's not a solid-gold Mr Miyagi-style, hard-earned life lesson, then we don't know what is.

Of course, once you've spent all those hours practising, you get to show off the fruits of your labours to actual, living people. Whether you've only got a few chords or can bang out the entire Zeppelin back catalogue with your guitar behind your head, people will be impressed.

And it's a great feeling, a vindication of all that time spent alone playing with yourself (easy now). Whether it's a party, a gig, or a formal recitation in the parlour like the precocious youngest child of a Victorian household, showing off your chops in public is a thrill. Plus, you get to throw all your favourite rock star shapes, which, as we know, is what this has all really been about.

Glorious caverns of guitar-y goodness, guitar shops have been the location of some of the best moments of our lives (barring, you know, children, marriages, that sort of thing).

From endless hours spent staring at beautiful slabs of want hanging in windows, through to the most recent snap purchase (you only went in for strings, but…), it's at the guitar shops that dreams become reality.

Tentative first strums on guitars you would cherish for decades, random pedal recommendations from fellow punters, in-jokes with friendly staff - these are the reasons we love our local guitar emporiums, and probably always will.

Most musicians don't fetishise their instruments in quite the same way guitarists do. We're a bunch of nitrocellulose lovin', tube-huntin', tone-wood tappin' gear hounds and proud of it.

Guitars have a beauty all of their own, even when they're not being played, and we cannot stop ourselves from obsessing over them. The same goes for amps, pedals, stands - you name it, and somebody will know the exact date of manufacture, materials used and what the guy that put it together had for lunch.

We're like trainspotters, except much, much cooler. Plus, we get to drive the trains.

9. Being a human jukebox

Sure, sometimes it can be a burden being asked to play the same songs over and over, but let's be honest with ourselves here: we all love it, really. Having a few folk sing along to your playing, even if all you're doing is banging out a half-remembered bit of Johnny Cash, is a fine way to spend an evening.

Not only do you get to show off just how many chords you can play (loads) and how many songs you can only remember the intro to (also loads), but people will buy you drinks. What's not to love about that?

Guitarists quite literally rock, which means we wander around the place with the self-esteem of Greek gods. Ultimately, we know that we play guitar for our own satisfaction. Yes, it's nice to get compliments or the odd free beer, but only we, the players, get to experience the satisfaction of a lick well played or a song well strummed.

It's an endlessly rewarding pleasure, and one that only grows sweeter as the years roll by. There's always something new to learn, some other trick to try or tune to pick up. If we're lucky, we get to surround ourselves with gear that we've spent years accumulating, playing music that we love, whenever the hell we want. And that, if you ask us, isn't half bad.

10 signs that you're a guitar gear snob