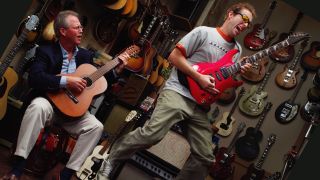 The guitar shop is a stressful environment at the best of times: you're improvising rough and ready licks on an instrument you've never played before, through an unfamiliar amp - with the rest of the clientele listening to your every fumble.

However, there are a select few individuals who possess the uncanny ability to make everyone in the vicinity groan with renewed vigour, courtesy of their unfortunate pairings of playing and personality.

Timmy has passed his GCSEs, and as a reward, his proud parents have unleashed the little cherub on a trolley dash. Funnily enough, when he's being interviewed by the rock press in three years' time, the official line will be that he stole his first Firebird from a Nashville strip-joint.

The Grizzled Rocker has a wire-wool ponytail, a face like Mick Jagger's scrotum and a tendency to launch into the same tired anecdote about "playing keys with Smokie back in the glory years". Everyone suspects he's just a borderline-homeless pathological liar who's sheltering from the rain.

In Levi's 501s and Ramones t-shirt, the Clichémonger arrives each lunchtime to work through his repertoire of Clangingly Obvious Guitar Riffs. He'll manage Layla, Whole Lotta Love and Sweet Child O' Mine, before the staff smash his fingers with a toffee hammer.

Blissfully unaware that he's the tragic embodiment of Mike Myers in Wayne's World, Mr Try-It-Out bounds in and announces he's "definitely thinking about" the '67 Strat in the window. He cradles it like a weekend dad, plays some plaintive blues licks… then remembers he still can't afford it.

Sensibly dressed, centre-parted and shadowed by his wife and kids, the Weekend Warrior arrives to toast his 40th birthday with the Sunburst Gibson Les Paul he coveted as a student. If you listen carefully, you might hear the guitar sobbing, aware its glorious spec will be wasted on the odd stilted version of Money For Nothing after dinner parties.

Just sometimes, the guitar shop's core clientele of window-shoppers and penny-counters is interrupted by a genuine A-lister, who will sweep in, point at a wall of vintage Strats and command: "Those". To catch this lesser-spotted species, try hanging out on London's Denmark Street.

The local scene belongs to him, and he's on first-name terms with everyone in the shop. Frequently seen hanging out at the counter trying to blag free strings, you'll know the local hero from name-dropping his latest support slot.

He knows you're just browsing, but still he clings to your side, offering unwanted pearls of wisdom. Ask to try a guitar and he'll let you, but not before he's played through the whole of Wicked Game.

Through modesty or manners, most of us keep the master volume to '5' when testing an amp. But there's always the guy who, despite his inability to shred, decides to wheel a Marshall stack into the acoustic room and blasts poorly executed neo-classical licks so loud that everyone liquefies on the spot.

He has no intention of actually buying anything, of course. The Show-Off is here to perform a technically impeccable Flight Of The Bumblebee, periodically looking up to check the clientele are suitably agog, and to scan for showbiz agents who might rescue him from his day job at the chartered accountants next door. Just ignore him. He hates that…