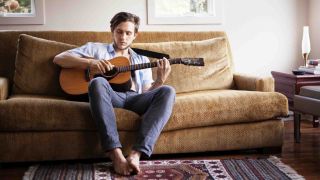 Want to know what makes great guitarists so great?

It's that they know, secretly, that they suck. That's what motivates them to be the best - they never stop pushing, learning, trying new things.

Now, sorry to break this to you, but quite clearly, you are not the best guitarist in the world. You may not even be the best guitarist on your street. But fear not, for MusicRadar is here to help, with 10 reasons why you're not as good as you think you are, along with suggestions on how to become the guitarist you were surely born to be.

Read on, brothers and sisters in string, and be reborn…

If you want to be able to play guitar to any level beyond 'awful, just bloody awful', there is one staggeringly simple solution: practice.

Practice, or - and you can trust us on this - you will always suck. And you'll have nobody but yourself (and, possibly, your internet service provider) to blame.

Let's not pretend that most of us are anything other than a horribly broken jukebox, playing half a dozen songs on an endless loop. It's comfortable and easy, like eating cereal out of the box or tattered old slippers.

But it's killing your playing. If you don't add to your repertoire, you'll be strumming the same three John Mayer covers for the rest of your life. Nobody wants that.

Seek out new artists and new songs, learn them, then do it all over again. You'll learn more from playing a ton of songs than through any other method, and you'll be an infinitely better musician at the end of it.

3. You live in a musical ghetto

Are you an indie kid? Metalhead? A sandal-wearing worshipper at the altar of jazz? Whatever your particular niche is, do yourself a favour and break out of it. Find some other genre, one that doesn't make you vomit blood, and learn its ways.

We love the greats because they blended different styles, brought in new influences and expanded the definition of what the guitar could be. That only comes from listening to anything and everything without prejudice.

Where would we be if the blues had never met rockabilly? If Dylan had never gone electric? If Eddie had never heard Bach? In a world of bland, uninspired nothingness, that's where. Explore the wider world of music, and reap the rewards.

4. You ain't got that swing

When was the last time you played along to anything other than the sound of yourself? If your answer is 'never', then your music is missing a vital ingredient.

We're talking rhythm, people: foot tappin', hand clappin' rhythm. You need it. Your playing needs it. Keeping time is crucial to being able to play anything properly, and it can be surprisingly tricky to master if you've never actually tried.

Do yourself a favour: buy a metronome - or even better, hunt down and trap a good drummer - and use it. Playing in time is the difference between a great player and a lonely player. Speaking of which…

We often wonder how many amazing talents have been lost to the world because they never left the bedroom. Playing guitar at home alone is safe, and you're unlikely to, say, sustain a head injury from an angrily lobbed cymbal.

But there is nothing quite like getting into a room and making a racket with other people. It's a blast (really, it's just about the most fun you can have legally), and you'll learn all sorts of stuff about rhythm, dynamics, structure, collaboration, even performance. Playing in a band is one of life's great joys - don't miss out.

Do you only ever wield your trusty electric? Are you eternally hugging your acoustic? Either way, it will do your playing a whole world of good to mix it up every now and then.

Acoustic and electric guitars are very different beasts, and your ears, musical brain and hands will adapt to the change. You'll play differently and find yourself exploring new musical avenues almost immediately.

And while you're at it, why not pick up other stringed instruments once in a while? Basses, banjos, ukuleles, balalaikas - they all represent fresh challenges, different styles of music and alternate tunings. Explore, have fun, improve your life.

7. You don't take care of your gear

It never ceases to amaze us just how badly some people treat their instruments. Lifeless old strings, fretboards full of gunk, buzzing frets, rusty hardware - these are all contributors to nasty-sounding guitars. And worse than that, they actively make playing harder and less rewarding.

If you've never had your guitar set up, get thee to a local guitar shop immediately. A well-maintained, properly set-up guitar is a revelation, and we promise you'll never let your guitars go to hell ever again. Love thy gear as thy love thy selves, children.

8. You believe the myth

Learning the guitar solely to lure somebody into bed isn't clever - it's the mark of a sexual predator. And drugs as a creative tool may work for a tiny fraction of the population, but only if they've put in thousands of hours of graft beforehand and are able to, you know, not die.

The only thing out of this devil's three-way worth giving a monkey's toss about is rock 'n' roll, and that is just one note in an entire symphony of music to explore. So stop banging on about Keith Richards, yeah?

9. You are a magnet for bad habits

It's easy to fall into bad habits, but they're a crutch we lean on when we're being lazy and can't be arsed to do things properly. Frankly, that's the sort of attitude that has lead to One Direction. Say what you like about those lads, but they're hard workers.

If you want to be the best, you've got to consider the whole package. Look at your posture and correct it; get into the habit of tuning up between every song; look after your hands; tidy up your fretting; work on getting those bends in tune. Apply yourself, dammit. The future of guitar music is in your hands.

Do you endlessly pore over pictures of boutique amps and custom shop guitars, wishing, waiting, hoping that one day they'll be yours? You're part of the problem, pal.

We're all guilty of fetishising gear, but dropping several grand on some flash-bang piece of kit isn't going to make you sound better. You already possess everything that can - hands, brain, balls/ladyballs - and no amount of overpriced tat is going to change that.

Focus all your energy on your playing and the gear will come in time. Remember: a good guitarist can make even the cheapest guitar sing.