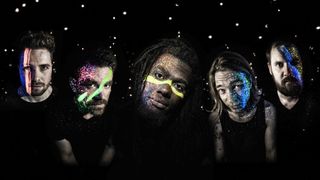 Looking for modern-day alt-rock with big riffs and even bigger choruses? EMP!RE are the answer, fusing post-hardcore heavy with punk hooks, topped off by singer Joe Green's impossible vocal range.

Along with co-guitarist Dave Thomas, James L'Esteve makes up EMP!RE's formidable guitar backbone, equally at home with palm-muted chug as tremolo-picked delay passages, as demonstrated throughout the band's new EP, Our Simple Truths.

Here, James gives us the lowdown on his ongoing gear addiction and accidentally channelling Bill Bailey…

"My first guitar was actually a Washburn Tour 24 Telecaster from my uncle, which I was told was given to and quickly disregarded by Hugh Cornwall of The Stranglers fame. It had hung around in my uncle's shed for years thereafter, and he gave it to me. Still the heaviest - as in actual weight - guitar I have ever held. I still have it somewhere."

"This is tough, but I think I would have to grab my Fender USA Strat as a first port of call. I hardly pick it up any more, but it has incredible sentimental value and just absolutely sings when you play it. I have tried hundreds of Strats out and they are all uniquely different, I feel like I've got one that I really want to keep, so I'd make sure that got out alive."

"It still haunts me to this day that I once was so broke that I sold a Fender Twin Reverb amp - an original, too. I just absolutely needed the money and I didn't even get very much for it. After that and the heartbreak I still carry today, I have never sold another bit of gear in my life!"

"Well, what would I not like to acquire is probably an easier question! I am looking at possible dual-amping options at the moment and full-on GigRig-style switching, along with a wealth of effects pedals such as some of the Strymon stuff!

"I think as guitarists, we are never quite satisfied with what sound we have got going on and it means that the shopping list continues to get bigger. However, if someone wants to give me that Fender Twin back, that would be great. Oh, and also a Gibson ES-335…"

"Everything! I think myself and Dave (the other guitarist in EMP!RE) have always worked much more on songwriting, rather then straight out technical proficiency. I think the idea of exploring some different styles to try and introduce more then a few flavours to the sound is where the next move is. I like the idea of taking something that is considered one thing and adapting it to be EMP!RE's thing."

"I try to play as much as I can and have a guitar in most corners of the house. That way, if I'm doing something mundane like waiting for the kettle to boil, I can just pick up a guitar and start playing. My practices are about as structured as a recently demolished building, so it could be anything. I was doing a fingerpicking-style version of Earth Song by Michael Jackson the other day so I could show our drummer that I could do it. It's the little things…"

"Wow, this is really a tough question, because I have found so much inspiration from different guitar players. I think currently, though, just for the opportunity to question how he makes the sound he does, I would say Justin Beck from Glassjaw. The guy is a wizard and totally unique. Plus, I reckon he'd be cool to hang out with!"

"Probably the old Washburn I have. It can just about still function as a guitar, and it's incredibly heavy if I needed to use it as a hammer or maybe even a life-raft."

"Probably one that has happened fairly recently and I knew eventually this would happen to me when we wrote this song. So, there is a sketch that Bill Bailey does, about if The Edge from U2's delay sound cut out, it would essentially sound terrible. Well, we have a stop in one of our songs, which has about four bars of me playing a part on my own that is washed in delay - to the point that when you don't play it with delay, it really sounds awful.

"So, as we are getting to the moment, I hit the delay pedal and it instantly just dies on me. The light on the pedal just goes and I am left to try and style it out with anything I can, but truth be told, I was so flabbergasted I just played the part without the delay. It must have sounded awful; I just wanted to be swallowed up on stage.

"To my delight, I see Joe our singer just about ready to hit his cue for the verse after turning his back to everyone to try and hide his hysterical laughter. Moral of the story: always rock two delay pedals, just in case!"

"Don't try to force riffs or songs out. I find that they come to me at the times when I am most relaxed and not really thinking about it. I think when I was younger, I spent ages procrastinating over a small tiny detail of something that wasn't necessarily that great to start with. I think now I'm way more relaxed about it, and it means the ideas I do have seem to flow more and are better."

Our Simple Truths is out on 20 May. EMP!RE tour the UK in May.