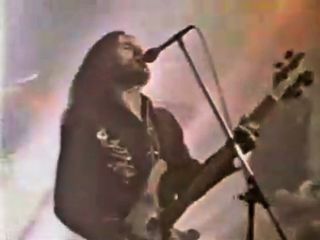 We admit, Microsoft's Songsmith software is pretty cool, and it's given us some well-needed laughs over the past few months.

Taking the piss out of Sgt Pepper? Why not? It's psychedelic enough that it begs to be turned on its head.

Sending up The Police's Roxanne or The Cars' Just What I Needed? No problem. Having a go at Rush's Tom Sawyer or Radiohead's Creep? Hell, Radiohead would probably approve of the latter - "Remix us, please!"

So wrong that it's really wrong!

But sometimes a joke isn't funny anymore. Exhibit A: Some joker who goes by the handle of adDEM just posted a light country-and-western-flavored version of Motorhead's Ace Of Spades that must be seen - and heard - to be believed.

It's very simple: Some things are so wrong that they're not right, they're wrong wrong wrong!. This is where are are, good people. We're at the tipping point of technology. Lemmy's 1980 masterpiece of metal has been defanged, deballed and defiled beyond all recognition. In this way, it has all the punch of Charlie Rich's Behind Closed Doors.

Check it out and see what we mean.

Mauling Motorhead. Is this what we want? Is this where we're headed as a society?

On the other hand...

OK...don't tell anybody...Really, let's keep this between us...But when we watched the remix for the first time (and the fourth), we did chuckle a little. All right, we laughed out loud. But hey - that still doesn't make it right!