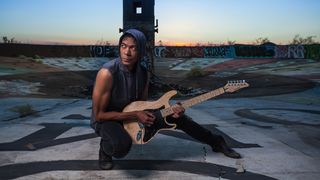 Over the course of three decades, Greg Howe has cemented his name into the upper echelons of renowned guitarists, earning respect from fans, critics, and peers.

Although often associated with the shred guitar scene, thanks in no small part to his 1988 self-titled debut album for Shrapnel Records, Howe long ago diversified his repertoire to include rock, pop, and fusion.

A producer, songwriter, and arranger, Howe has recorded almost a dozen albums. He is also widely recognised as a session player and sideman whose work has been featured on recordings and tours by a cross-section of artists, among them Justin Timberlake, Rihanna, and Enrique Iglesias.

And, of course, there are the collaborations: Victor Wooten, Richie Kotzen, Jason Becker, Billy Sheehan, and Stu Hamm are but a few.

Last year, Howe returned to his instrumental roots with Wheelhouse, an album he calls his most personal to date. He expanded his resume to include Simon Phillips’ prog band, Protocol, an unexpected move that he describes as serendipitous.

“The booking agent was looking for someone with marquee value, like Dennis Chambers. I called him, but he’s so in demand that he was just too busy. So I decided to call Simon Phillips, because I’d worked with him years before.

“The next day, as I’m dialling, the phone rings and it’s him. I’m thinking my manager must have sent him an email, but he was calling to find out if I’d join Protocol, because Andy Timmons had left. It was a great situation. I could record his album, and he had a lot of touring lined up for Europe during the same time I planned on doing my tour, so I decided to move my tour to 2018, which is why I’m doing it now.

“Honestly, I was a little tentative at first because prog didn’t feel like music I wanted to do. So I said, ‘It sounds interesting. Send me some material.’ It was thoughtful music, not music written to show off what you can do. There were real landscapes and stories, heartfelt conveyance of emotional stuff, and it was really musical, so it was very attractive.

“It was a pleasant surprise. It’s classified as prog, but it has a lot of rock, jazz, and funk qualities. I think it’s much more fusion than prog, so I was really into it. I had a great time making the album - we did six weeks in Europe, and it was very well-received.”

When MusicRadar caught up with Howe, he was preparing for his own long-awaited European tour. Joining him are bassist Ernest Tibbs (Protocol, Allan Holdsworth) and drummer Gianluca Palmieri (David Garfield, Frank Gambale).

“In a three-piece scenario, I’m not only the harmony backdrop but I’m also the lead singer, so to speak,” he says.

“I have to be the voice of the melody and establish the melodic content of the song, but also fill in some of the harmony backdrop that you would normally get from a rhythm guitarist or a keyboard player. It’s a challenge, but it’s a fun challenge. I sit in the land of melody, and hope that when I’m not doing that, I can provide a big, full sound on top of that rhythm section.”

Howe teaches guitar through private instruction via Skype and often holds clinics while on the road. But if you’ve come here for tips about theory and technique, guess again.

“It’s such a humungous topic, and it’s so broad, that in some ways you can talk about it all day,” he says.

“It also depends on the situation the musician is in. A lot of people are probably thinking, 'Don’t you think that warming up is a good idea and a priority?' Yes, it is, but the things I’m talking about are more fundamental as far as their role in the grand scheme of this.

1. Really listen to what the rest of the band are playing

“When it comes to live playing, which is what I’ve been doing a lot more of lately, the thing that is most important is that we are listening, really listening, to each other, so that we can have spontaneous moments, lock into that feel that’s irresistible, be ready to pick up on the motif that a musician may play, or enhance a soloist and comp correctly, or comp in a way that highlights what they’re doing.

“When you can listen like that, and the band really becomes connected with that chemistry, amazing things can happen each night and they can be different each time. That brings the fun element, fun brings good energy, people sense that energy, and when people watch a band that’s having a good time, that’s a much more fun show to watch than bands that seem to just be playing complicated things, or playing anything just for the sake of showing you what they’re capable of.

“I like the idea of a band having a good time and listening to each other onstage. That is serious criteria if I’m bringing people into my band: are we listening, are we working together, and are we having fun.”

“If we’re not having a good time, and we travel all over the world, we’re on buses, in airports, and on long rides together, that’s a lot of work to not have a good time. The whole reason we do this is because we love it - because there are much easier ways to make a living.

“The whole point of this is that I’m drawn to music and I can’t keep my hands off of it. It’s too powerful and connected to me. It’s something I need to do, and if I’m going to spend this much time in music, it has to be fun.

“This is why, no matter how much money we’re making, no matter how much superficial success is coming our way, success to me is measured by only one thing: how much fun am I having. I know that sounds cliché, but I’ve walked off tours that paid $5,000 a week and promised 22 months of steady income that way, because it wasn’t fun.

“I’m not doing this to try to get rich. I’m doing this because I have to do it, because it’s a passion, and it has to be fun. Why would you put a band together - even if it’s a hobby, even if you just play on weekends - if not to have a good time?”

3. Be true to yourself, but don’t forget your audience

“One of the most important things when I’m writing is that I have to love the music. It can’t just be some musical backdrop excuse for playing guitar. It has to be a song that I love, whether there’s a guitar solo in it or not. I have to believe in what I’m trying to convey.

“I also have to find that balance between what I love and what I believe people will enjoy. That’s tough sometimes, because as a musician, a lot of times you like things that many people don’t like at all or that they don’t understand. They just want to be entertained and have a good time. I like pop music and easy music, but I also like music that challenges my listening sensibilities, where, 'That’s interesting, they’re hitting on the upbeat, I like the melody against that particular chord, I like how they harmonised the melody the second time around.'

“So when I’m writing, I have to try to find a balance between what I like and what I think the general listener of this genre would like. It would be selfish of me, it would be self-indulgent, to just put music out the way I like it and not have any consideration for what the listeners might get out of it. On the other hand, it would be weak and selling out if the only thing I do is cater to what I think people would like. You have to find the overlap, and there’s always overlap, which you can find by being creative.”

“As I get older, tone is becoming a foundational priority for me. When I was younger, I didn’t really connect the importance of tone to a musical statement. Of course you want your tone to sound good, but the real statement is in the music, not the tone - that’s how I used to think. Today I see they’re not disconnected: they’re part of the same thing.

“There are statements you can make on the guitar that are big because of the tone. You can sometimes make short, quick statements with massive tone, and you discover afterwards that you don’t need to say much more because it was said so nicely and concisely that adding anything beyond that moment is too much.

“In the old days, I could say, 'Oh, this amp doesn’t sound great, but I can get through the night. I’ll be all right.' That doesn’t happen any more. Today it’s, 'I need an amp that allows me to express myself.'

“Having the ability to be as expressive as possible is now much more of a priority than having the ability to impress you with all kinds of fretboard gymnastics. Hundreds of thousands of people can do that. I want to knock you off your chair with pure, honest musical statements that you can feel are coming from a genuine place.”

“This is connected to something we discussed earlier. Whatever you’re doing musically, one of the worst things in the world is to have somebody in your band, regardless of how talented they are, that you don’t like.

“If you don’t like their energy, if you don’t like what it feels like to be around them, your music will take a hit and so will your good time, and that’s never worth it. You’d be better off getting rid of the amazing musician who’s cocky, brags, and likes to show up late, and hire someone who is maybe not as talented, but who is a team player and is into camaraderie and having fun. Your music will reflect, big time, who you interact with and the dynamic of that relationship.

“Every now and then, two people who hate each other in a band can produce intense music, but they’re suffering through it. For me, everything has to be fun. The whole point of this is to have a good time, so vet the people you’re going to be working with, and make sure that it feels good prior to jumping in there and committing yourself wholeheartedly.”

Greg Howe tours Europe throughout October and November - head over to his official website for more details.