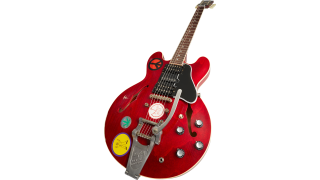 It's one of the most iconic Gibsons of all time, taking centre stage in the hands of Ten Years After's Alvin Lee at the legendary 1969 Woodstock Festival. Now the guitar he called 'Big Red' is finally getting the Gibson Custom Shop tribute treatment it deserves.

The guitars are built to the exact specifications of the original, including the HSH pickup configuration with uncovered Alnico III Custombuckers and a single coil Seymour Duncan SSL-1 in the middle position.

A lightly relic’d sixties cherry finish and accurate recreations of the stickers Lee added to the guitar adorn a three-ply maple/poplar/maple body.

This model captures the 'Big Red' ES-335 as it was in 1969, but it went through a number of changes in its history that Guitarist magazine detailed when it featured the original guitar on its cover in a Woodstock 50th anniversary special earlier this year.

British guitarist Lee bought the guitar around 1963 / '64 from a Nottingham music store for around £45, and it even included a fitted case for the price.

By 1967 the guitarist was experimenting with an extra pickup between the traditional PAF humbuckers. A year later the first 'ban the bomb' sticker on the upper bout became the first to be added.

The blues rock band's set at Woodstock on Sunday 17 August 1969 that would make Big Red famous was actually delayed for a few yours due to the torrential rain that hit the site – proving waterlogged festivals aren't just a modern affliction!

Just a year later Alvin had replaced Big Red's Bigsby with a TP-6 tailpiece, coinciding with the UK release of the Woodstock film that would raise Alvin and Ten Years Afters' profile significantly. But it wasn't plain sailing for Big Red…

Around 1972/'73 the guitar's neck was damaged on stage. Gibson repaired the damage and lacquered over its stickers. It's the replacement of the headstock that has made the guitar's date difficult to pinpoint. The guitar remained a regular for Lee until 1986 when it was retired, largely due to its value.

The original Big Red ES-335 as it is today

Sadly, Alvin passed away in 2013, aged 68. His original Big Red is now for sale via RockstarGuitars.com, price available on request.

For more info on the Custom Shop recreation visit Gibson.