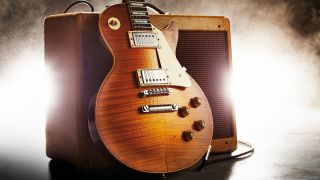 Gibson, in a dramatic response to the ongoing controversy over its apparently belligerent stance on 'copycat' makers, has issued a markedly emollient statement, and appears to want to draw a line under any simmering bad feeling amongst competitors and the public.

"While new management is building on the legacy, quality and craftsmanship that guitarists have come to love and expect from Gibson," reads the statement, "they will also continue to manage and attempt to resolve the conflicts of the past.

"A clear challenge has been in the area of brand protection," the statement continues, before outlining the firm's recent victories, and drawing a distinction between broader trademark protection and out-and-out counterfeiting.

"Over the past eight months, the team have successfully dealt with over 4,500 counterfeit and ‘knock-off’ guitars coming from overseas that were clearly designed to confuse the consumer into thinking they were buying a real Gibson.

Gibson issues threat to rival guitar builders: “You have been warned; we’re here to protect our iconic legacy”

Addressing the issue of wider trademark protection, and its well reported dispute with Dean Guitars, the statement continues: "With regards to other guitar brands and companies in the marketplace, Gibson has filed specific lawsuits over the past several years with the intention of protecting its original trademark(s) rights and to avoid consumer confusion in the market.

"All of the recent attention on the few lawsuits in process stem from several years of legal action initiated well before the new leadership arrived in November of 2018. With specific regards to the inherited and ongoing legal dynamic with Dean Guitars, the new Gibson team have made several attempts to communicate with them directly to avoid a prolonged legal battle. Gibson has genuine intentions of constructive resolution that could be beneficial to both sides.

Finally, the firm directly addresses the current controversy, and says it's led the team to "re-evaluate their approach going forward with the intention of finding more constructive solutions to managing brand protection in the industry. Over the past few weeks Gibson has made significant progress in reducing counterfeit ‘attacks’ and they have entered into creative collaboration agreements with key boutique guitar makers and other related industry parties. A clear indication of their intentions going forward.

“I am proud of the progress we have made with our attention to quality, with the launch of the new collections, and with our renewed engagement to our Gibson authorized dealer base" says James ‘JC’ Curleigh, President and CEO of Gibson

"At the same time, we acknowledge there are still legacy challenges to solve going forward, especially around brand protection and market solutions,”

“It is time to make the modern-day shift from confrontation towards collaboration, whilst still protecting our brands, and we are committed to making this happen starting now”.