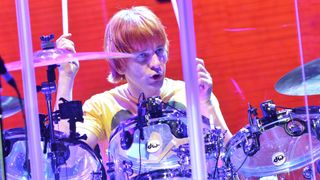 The birth of rock ’n’ roll brought rebellion to a generation, with angry 20-somethings shunning tradition by wanting to be as far removed from their parents’ outlooks, and professions, as possible.

But what if your dad is a rockstar? Do you choose to become the antithesis and bury your head in spreadsheets and accounts, or take on the family trade and see where it takes you? Here are seven famous drummers who's children followed in their footsteps and picked up sticks to great success.

Picture this: not only are you the son of the drummer in the biggest pop band of all-time, but Keith Moon - or ‘Uncle Keith’ to you - is also your godfather. That was reality for a young Zak Starkey, who was given his first drum kit by The Who’s drummer.

Despite Ringo’s reservations at encouraging his son to enter the family trade, Zak persevered and taught himself to play. By the time he reached his early 20s, Zak had manned the kit for The Spencer Davis Group, before joining The Icicle Works and contributing to albums by The Who’s John Entwistle (The Rock) and Iron Maiden guitarist, Adrian Smith (Silver and Gold).

A three-year stint as part of his dad’s Ringo Starr and His All-Starr Band line-up could have been a life-long position for many drummers, but in 1996, Zak first took up his role in The Who for a tour performing Quadraphenia. “I couldn’t believe they were getting back together.” Zak told the Pittsburgh Post-Gazette in 2019. “I’d already played with John and Roger quite extensively over the years. But I couldn’t believe they were going to get back together as The Who, so obviously, it blew my mind.”

While Zak has remained a regular in The Who’s line-up - performing live with the band whenever possible since the 90s - and contributing to 2006’s Endless Wire, his prolific career doesn’t stop there. He was also a member of The Lightning Seeds, played on Johnny Marr and The Healers’ Boomslang and joined famously Beatles-mad Britpop kings, Oasis between 2004 and 2008. Zak’s drumming can be heard on Don’t Believe The Truth and Dig Out Your Soul.

We can’t imagine what it would be like to be the son of the drummer who many consider to be the best rock has ever seen. It’s a double-edged sword: study from a master or take up keyboards. Jason Bonham was only 14 years-old at the time of his father’s untimely death, but after picking up sticks at age five (and making an appearance alongside his dad in The Song Remains The Same), it was clear from an early age that Bonham Jr was on a drumming trajectory.

Jason’s career has been hugely successful in its own right, performing with the likes of Paul Rodgers, UFO, Foreigner, The Quireboys, Joe Bonamassa, and supergroups Black Country Communion and California Breed.

However, as you’d expect, he has also dedicated a large part of his career to honouring his late father. Jimmy Page enlisted Jason to drum on his Outrider album in 1988, before Jason took the throne for Led Zeppelin the same year at the Atlantic Records 40th Anniversary party.

A more low-key Zeppelin reunion happened for Jason’s wedding reception in 1990, however his defining public performance to honour his father is Led Zeppelin’s 2007 Celebration Day, where the band paid tribute to late Atlantic Records founder and president, Ahmet Ertegun.

When Queen fans The Darkness found themselves without a drummer in 2015, they turned to Rufus Taylor, son of none other than Queen’s Roger Taylor. But this wasn’t Rufus’ first taste of what his dad did at the office.

In 2008, Rufus joined Brian May and Kerry Ellis to play in front of Prince Charles and Camilla Duchess of Cornwall at the London Palladium, before getting his teeth into the Queen catalogue as the touring drummer for the We Will Rock You musical. With his apprenticeship well and truly served, Rufus joined Queen and Adam Lambert on tour, performing alongside Roger and taking the ‘first chair’ for songs such as Tie Your Mother Down while Roger sang lead vocals.

The two generations also participated in solo battles, with Rufus displaying some impressive chops against his old man. In addition to performing with Queen, Rufus has sat-in behind the kit with Foo Fighters while Queen-obsessive (and mate) Taylor Hawkins handles vocals on Under Pressure. Since joining The Darkness, Rufus has gone on to record two albums with the band, Pinewood Smile and Easter Is Cancelled.

Jazz drumming legend, Joe Porcaro has a list of credits under his belt that would  put him-alone into the history books as a  first-call player: The Monkees, Box Scaggs, Glen Campbell, Lee Ritnour, Madonna. We could go on…

But as we know, the Porcaro name is one that Joe’s sons have helped to cement as one of the greatest musical families in the recording business. Jeff Porcaro started his career backing Sonny and Cher, before simultaneously forging a career as one of the greatest hired guns the studio business has ever seen, and forming Toto alongside his brother Steve Porcaro, as well as guitarist Steve Lukather, keyboard player David Paich, bassist David Hungate and vocalist Bobby Kimball.

Here, Jeff would present the world with a new definition of the half-time shuffle on Rosanna, a groove that is still a rite of passage for drummers to this day. In addition to his own compositions, Jeff Porcaro’s work with the likes of Paul McCartney, Miles Davis, Dire Straits, Pink Floyd and drum task masters, Steely Dan, reads more like a music fan’s daydream list than a CV. Jeff’s life ended tragically early in 1992 when he was just 38 years old. His legacy places him firmly towards the top of the all-time session legends tree.

Few drummers have influenced progressive metal as much as Mike Portnoy - a drummer who has insane chops, a tight sense of groove and the ability to explain it all in a way that makes it seem so easy. Of course, it’s not easy, but if anyone is equipped to learn from an icon of the instrument, we’d say it’d be Mike’s son, Max.

Portnoy fans will know that Max has been surrounded by drums and drumming his whole life, and even had a set of signature Sabian Stax named after him. After performing with the band, Next To None, Max’s most recent project Tallah has just released their debut album, Matriphagy. Fans of heavy grooves will love it!

You know Phil Collins. As the drummer - and later frontman - of Genesis, Phil Collins influenced drummers across the globe. He’s sat in with Zeppelin at Live Aid and managed to perform at both the London and Philadelphia concerts. Oh yeah, he also played a part in inventing one of the most used drum sounds in recording history. But it’s that fill from In The Air Tonight from Phil’s that most people will air drum to.

So, when Phil stepped away from the drums over the last decade, who better to have as the backbone to his band than his son Nicholas? Phil might have come under a little bit of fire from critics for his decision, but defended it, telling Australian TV show, The Project “It's not because he's the boss' son that he's playing the drums, it's because he's good enough.”.

Clearly his Genesis bandmates agree, as Nick will be taking his dad’s place behind the kit while Phil performs lead vocals for Genesis’ planned reunion tour. "He can sound like Phil and it gave us a whole idea of how we could do it, because we knew Phil couldn't be the drummer on the road again,”, keyboard player Tony Banks told the BBC earlier this year.

Max Weinberg got the gig as Bruce Springsteen’s long-term E Street Band drummer after answering an advert in the Village Voice. From here, he’d go on to play on not only some of Springsteen’s biggest hits, but also worked with Meat Loaf on Bat Out Of Hell (among others), Bonnie Tyler, Carole King and Barbra Streisand to name a few.

When The Boss dissolved the E Street Band, Weinberg found himself back at square one, picking up whatever paid gigs he could find, until he became the drummer and bandleader of The Weinberg 7 on Late Night with Conan O’Brien in 1993. Jump forward to 2009, though, and Max enlisted the help of his son, Jay - already carving out a name for himself in his own bands - to fill in for him during Springteen’s live dates, which clashed with his commitments with Conan O’Brien. Not a bad depping gig at all.

Jay went on to become the drummer for Madball and Against Me! Before replacing his idol, Joey Jordison in 2014. Jay had been a fan of the band since his dad introduced him to their music as a child, even posing for a photo with Jay - sporting a Corey Taylor mask - and Slipknot guitarist Jim Root, which the three later recreated.

Jay has since recorded two albums with Slipknot, and considering he’s filling the shoes of one of the most influential drummers of a generation, we can’t think of a better person for the job!