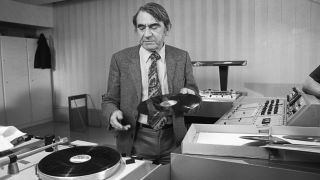 Until the 19th century, all music had been created by acoustic instruments or voices. The very first electrical and electronic instruments were invented in the late 19th/early 20th century, but it wasn’t until the ’50s that instruments like organs, electric guitars and synthesisers really began to dominate music.

As such, in the early 20th century, small groups of musicians, composers and technology enthusiasts began to question what we understood by music. There were various ideologies (some of which we’ll return to later in this series), from the noise music of Italian futurist Luigi Russolo, to the serialist movement and avant-garde expressionism of Arnold Schoenberg.

The wider proliferation of sound recording technology only really exploded in the ’50s and ’60s, but in the early 20th century people were questioning how the emerging technology could be used. Even the hugely influential composer Igor Stravinsky acknowledged the potential for “creating music in a way that will be peculiar to the gramophone record”.

Many of these avant-garde movements were fascinated by the potential for technology to reframe the way we approached composition. Musique concrète was a prime example, as much a challenge of technology as it was of music, overlapping with the development of broadcast technology. Schaeffer was one of many engineers to take an interest in the composition potential of recorded sounds. Rather than generating sound from conventional instruments, he explored the idea of using field recordings as instruments, eventually establishing his own Studio d’Essai in Paris with French national broadcasting organisation RTF, at which he produced his 1948 Cinq études de bruits (Five Studies of Noises), arguably the definitive musique concrète work.

In Cairo, Egyptian composer Halim El-Dabh was carrying out similar experiments, using a magnetic wire recorder along with echo effects to record sounds and create soundscapes. El-Dabh moved to the US in 1950, going on to have a long and influential career as a composer and academic. His 1944 Expression Of Zaar is a fascinating Arabic counterpoint to Schaeffer’s European-influenced work.

Musique concrète’s influence on contemporary music is a fascinating topic. The movement remains relatively obscure – the likes of Schaeffer and El-Dabh are not exactly household names – but despite that, their work had a quiet influence on the way we now understand music.

There’s a strong argument that musique concrète laid the groundwork for all sampling as we know it, but also for an experimental streak that extended from those avant-garde composers via the Beatles (whose Tomorrow Never Knows is a musique concrète exercise in tape loops and sonic manipulation) through to all the bands they inspired. The influence is clear in the music of Four Tet, who’s always been fond of a manipulated and recontextualised sample; likewise with the field recording atmospherics of Burial, who uses found sound and effects to add character to almost all his tracks.

You can incorporate similar techniques in your own music relatively easily but perhaps the bigger lesson to be learned here is how we can rethink our approach to music and push the boundaries of emerging technology.

Pretty commonplace by modern standards but just as relevant, turntables are an obvious sound source for manipulation of recordings. The more control you have over the playback, the better. Look for adjustable pitch control as a minimum, possibly with a reverse playback option. Dig through charity shops for weird records to use as source material; sound effects/unconventional recordings are much better than music recordings.

If you’re looking to use recordings as sound sources, you probably don’t want to limit yourself to existing material. Take a lead from the pioneers and experiment with field recordings and original sounds (recorded on tape ideally). Cheap mics are very easy to find on the second-hand market, but also consider contact microphones, which allow you to create experimental recordings from just about any object you can imagine. If you’re handy with a soldering iron the components themselves cost pennies, but for an even easier option you can start with a cheap guitar pickup – most budget acoustic models are a simple piezo transducer connected to a ¼-inch socket. They’re available from around £5.

The availability of reel-to-reel tape machines was one of the most important factors in laying the groundwork for musique concrète. Pro quality tape multi-track machines from brands like Studer and Ampex still command steep prices, but domestic models can be picked up very cheaply. Fancier multi-track machines are capable of recording anything up to 24 individual channels of sound, but a basic stereo ¼-inch machine is more than enough. Experiment with manipulating the tape by hand, cutting and splicing or setting up tape loops. If you want a machine capable of higher quality recording as well as experimental tweaking, check out the Akai 4000DS or Revox A77.

All-access artist interviews, in-depth gear reviews, essential production tutorials and much more.
Get the latest issue now!
More Info
The best of MusicRadar in your inbox