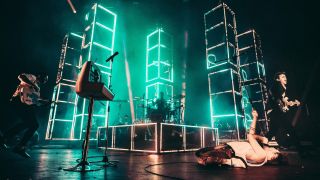 There is a quote attributed to Beethoven that Rou Reynolds, frontman for UK rock band Enter Shikari, references in the announcement for their new book Dear Future Historians: ‘Don’t only practice your art but force your way into its secrets. Art deserves that…’

It’s a fitting summary of the DIY spirit - the need to dismantle and understand - that still inhabits this arena-filling band. Dear Future Historians, an unpacking of the lyrics and meanings behind the majority of group’s back catalogue, is the latest step in that process. From their first packed unsigned shows to forming their own label, the group have long delighted in democratising music, removing the smoke and mirrors and, wherever possible, adding lasers.

“To me that quote encapsulates the opposite of the normal thinking… that art shouldn’t be dissected because that somehow takes away its magic,” says Rou. “I guess I disagree with that really. We have this incessant need to put people on pedestals, you know, but the truth is that we are a creative species, full stop. That’s one of the defining features of humanity, our ability to imagine and to create, and it’s in all of us, whether we think that or not. Demystifying that is absolutely imperative, really…”

Here, the frontman talks us through his thoughts on writing, production and lessons learned in the group’s 16+ years.

Have you noticed any relationship between the clarity of a song’s lyrical intentions and its popularity with fans?

“Certainly the last album, Airfield, would be one that so many people felt the need to communicate with me the power that they thought those lyrics had… but it’s hard to tell if it’s those songs that actually connect the most, or whether they create a vocal minority. But, yeah, it seems to be ones that are either the most radically honest, or the ones that are about something that perhaps hasn’t been really addressed elsewhere before.

“I think I mentioned this about Redshift, in the book, for example. That is a song that’s inspired by the sheer luck we have to be alive at this point in the universe’s history - in this age where we can actually see other galaxies and we can explore, to some extent, our space in the universe. Whereas, two or three trillion years from now, all the galaxies will be accelerating away from each other at the speed of light, so will become undetectable. So, any civilisations alive at that point will just presume they’re all there is, which is very sad. But what I’m saying is that there aren’t many songs about that subject!

“There are a million songs about love, so I think those ones often chime with people because it’s something completely new that they’d never heard put to a beat and rhythm and pitch, so those seem to really chime with people as well.”

Obviously, this book addresses the lyrical side of your thought process when writing. Do you have any recurring habits when you write music?

“I really don’t have any sort of routine way of writing. I’m often inspired, more so if I’m writing on an instrument that I’ve never even picked up, because of that classic thing where you’re just approaching it as a way of conveying something, instead of thinking, ‘Oh, I’m playing this chord, that should probably now lead to this chord. That will sound all right.’ You’re then much more in the moment and you’re just playing something using your emotions, rather than any sort of reasoned way of thinking about it.

"I’ll write on anything I can put my hands on, really. It’s all about just getting an initial idea that I'm excited with and then I’ll take it to the studio.”

So does that make for an expensive habit, then? Are you someone that needs to chop and change gear quite a bit?

“I think now, with how far technology has come on in the software, you’ve got every instrument you could ever want in front of you on a keyboard. It’s not as inspiring as playing an actual physical instrument, but certainly to get the basis of an idea down, there’s so much in front of you on a laptop. But then I do like the occasional trip to a quaint, cobwebbed music store; you can pick something up from there and see if anything comes out of that.”

What does your laptop setup consist of? What do you use when you’re trying to put together ideas on-the-fly?

“Well I produce on Logic. It’s the one I can work with quickest as my DAW. Other than that, recently I’ve been using a bit hardware. Well, on The Spark, I co-produced it with David Kosten, who has the most incredible collection of vintage synths: all these wonderful old Moogs and Rolands and Prophets and stuff. That was an absolute dream, really, to be able to work with all of that. And it was nice because that album feels like our post-punk moment, if you like, so it was nice to be able to echo the origins of that genre with these synths that are from ‘78 onwards.

"But then with software, there are modelling synths and emulations and it’s so good now, whereas with the really old synths from the late ‘70s onwards, they fuck up a lot. I think one of David’s Rolands had to be sent back [for repair] twice during that album process, they were always going out of tune - so it’s also quite nice just to have the familiarity and consistency of software.”

What do you use alongside Logic? Do you have any favourite plugins or controllers and other hardware?

“I run through a Focusrite Scarlett, and then at the moment I’ve got a Novation MIDI keyboard. And most of the hardware I use is Korg. I started off, way back in the day, on the Kaoss Pad and the Electribe, and I just got the Prologue not so long ago, which is awesome.

"Software, I spend a lot of time on FabFilter stuff - all their EQs and compressors and limiters are brilliant, their effects as well. I’m loving, and probably overusing, vocal synths at the moment. Then on the more normal vocals, the Waves CLA Vocals plugin is kind of my go-to.

"Also, The Mangle is an amazing new plugin that I got recently - I think it’s from Sound Guru. It’s incredible for just making a start in texture, a start in soundscape to maybe be inspired by to write a riff to or something, but it’s an incredibly versatile plugin.”

Have you spotted any common qualities in the tools and equipment that you tend to use?

“Well, I’m a very lazy producer, so I will always want a clean interface, I want things right there at my fingertips; speed is important. Even though I think I actually write quite slowly in a considered way, I’m a bit spoiled - I want the sounds that I want right there. The presets that I’ll then maybe edit and go into, I want them to sound great to start off with and I want them to be varied and interesting, so that’s normally it. If something out of the box is good and you can get started quickly then that’s kind of all I’m looking for, really.”

How does a meaning behind a song translate into the gear you use on a song for you?

“That’s something I’ve thought about more and more. For the last two albums, texture became really important. I guess, the more I took a front seat in the producing side of it. It’s nice to make bold statements in the lyrics and to have things fairly obvious in terms of what we mean, but then, also, it’s nice to create some things where you kind of let the music do the talking.

"And so yeah, I find that very interesting, just trying to create textures that echo the sentiment or the notion that we’re trying to convey. Especially because lyrics usually do come last, so you’re always going to be influenced by what the song sounds like.

“Like on the last album, Airfield, again, to use that as an example, but the piano sound from that… The lyrics in that track were very open and very empathic and sombre and we wanted the piano to sound as far away as possible from the clean ‘90s house MIDI Piano, as a lot of the piano sounds we’ve had in our tracks have been like that. So we took this upright piano apart and mic’d up all its mechanics and did this really nice, honest, raw texture, almost so the mechanics are so loud that it sort of feels a bit creaky and like it could break at any point, and that echoed the sentiments of the lyrics, the fragility of the human experience. Stuff like that is becoming increasingly important for me.”

You mentioned earlier the importance of demystifying things. Are there any impressive-sounding techniques that you have learned that actually have quite simple origins?

“Definitely, one of our biggest inspirations, certainly on production, would be drum and bass. So I think learning how Reeses are made was like that. Reeses are these big, fat, swooping, resonant synths [so named for Just Another Chance by Reese, which first employed the technique], and they can sound so incredible and a lot of the time all it is is just processing a synth, bouncing it, filtering it or processing it more, bouncing it… and you just build it up, bit by bit, and the end result will sound so much more alive and modulating. The initial sound can sound sort of shit and raw and very basic, but it’s just these tiny little pigeon steps get you to this glorious sound.”

What’s the most important lesson you’ve learned about writing?

“One thing that I’ve found out - through seeing both sides and trying both things - is don’t try to be all-encompassing, when you could be specific and honest. I think, especially with pop music, there’s kind of a pressure to be able to write something that everyone’s going to get, whereas I think the best songs are actually quite specific and they may be about something the majority of people have never experienced, but because it has that specificity you’re going to touch the people that do get it in a much deeper way. I think that’s more important than doing the thing where you’re watering down your initial idea just to try and make it understandable and palatable to a wider audience.

“It brings us back around to the interpretation thing [of the book] I suppose. People will adapt things to whatever it is that they’re going through. I think we all do that, because we’re all the character in our own story, aren’t we? We’re the protagonists. We’re always looking at ways to connect things to our lives.”

Dear Future Historians: Lyrics and exegesis of Rou Reynolds for the music of Enter Shikari 2006-2019 is out now via Faber Music £19.99 paperback original)