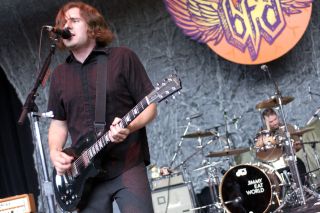 Jimmy Eat World are back with a new album, but it seems recording was a testing time for sticksman Zach Lind.

The drummer told Rhythm that on Damage, Jimmy Eat World decided to go a different route.

"The last few records we've made in our own studio, this time we went to LA to record and recorded on our producer Al Johannes' house," he said. "I wasn't sure what the room was going to be like. For me, finding a drum sound for recording, so much of it is dictated by what the room sounds like and if the room is reflective, dry - all of that stuff."

Getting to grips with the room caused one or two issues for the drummer.

He revealed: "The room I recorded in was really reflective. It was kind of a small tiled room with windows. It disorientated me. I had to go tune my drums out in the living room then bring them back in so I could have confidence that they sounded how they were supposed to sound. It was different to what I was used to but it sounded great."

Once he had his sounds dialled in, Zach was able to get behind the kit, although, again, he tried something a little different.

"On a few songs on this record I didn't use any right hand timekeeping, no hi hat or ride, but I would track it and then overdub a tambourine instead and you can hear that really well on 'Book of Love.'

"I mostly used my two SJC snares - a single ply, 14"x7" maple drum with die cast hoops, that sounded awesome, and I also had an 14"x8" aluminium shell. I used those on probably eight of the songs on the record."