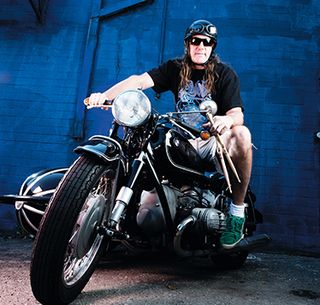 Check out this artist spotlight on Tool's Danny Carey, courtesy of Vic Firth. Great interviews with Danny, and of course some awesome playing!

Killing a song in the name of…

We reckon this could be the worst cover version ever- what do you think? Have you seen worse on YouTube - let us know!

Next month in Rhythm

We've just finished issue 221, the September of Rhythm - celebrating 130 years of Gretsch drums with a look at the history of the iconic drum company and the impact that 'That Great Gretsch Sound' has had on music down the years. We can also reveal that there's going to be interviews with Rob Brian (Siouxsie Sioux), Fall Out Boy's Andy Hurley and original Clash drummer Terry Chimes. After all that, we're off to watch Alan Partridge: Alpha Papa. A-ha!

What's been the best Festival so far this year?

Glasto was great, but for us so far, Download's had the best drumming on display. If you weren't lucky enough to be at Donington this year, then check out these Sky Arts 'full gig' YouTube videos. We were there, and can definitively say that the drumming from Joey Jordison, Ray Luzier, Jon Theodore, Nicko McBrain and many other of the more rockin' of our drum fraternity were great. Check out our own festival report here. What's been your best festival so far? Let us know on Facebook, Twitter @rhythmmagazine or by emailing us atrhythm@futurenet.com!

Drum cover of the month

You've got to have some drumming cojones to take on one of Vinnie Colaiuta's tracks from Sting's Ten Summoners' Tales. But Jimmy Rainsford here's done a great cover of 'If I Ever Lose My Faith In You'.