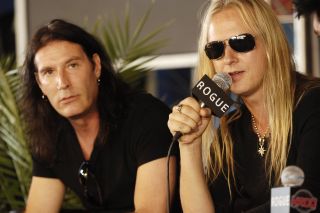 Some of you may be heading to the Pilton Pop Festival this weekend - in fact you may be there already. You may be reading this on some sort of magical portable word-reader, or transcendentally hovering somewhere in the astral plane that has wi-fi. Either way, here's some sage advice from Alice In Chains' drummer Sean Kinney, who shared this with us backstage at Download the other week: "Try not to wake up in someone else's vomit - that's kind of a drag. If you wake up in your own vomit that's okay, but if you wake up in someone else's vomit you might want to roll it back a notch. Try to not have a blue tent because when you say, 'Hey there's a party in the blue tent,' you look out and most of the tents are blue, it makes it harder to find yours. So try and have a different coloured tent."

Some of you may have already got your fevered mitts on the latest Rhythm, but the August issue officially goes on sale this Tuesday. Travis Barker's on the cover and he shares with us his own personal tips, techniques and work-outs he uses on the road with Transplants, Blink-182 and more. He also reveals all about the new Transplants album In A Warzone - which by the way is streaming in its entirety on YouTube right now.

"Nashville might be the last place a group of musicians playing on an album will go into the studio and record together," Taylor Swift's drummer Nick Buda tells Rhythm. He's one of 10 top Nashville session drummers we've rounded up for the first part of our feature on the drummers of Nashville. Nick and the others tell their stories and reveals what it takes to be a drummer in the country capital of the world.

On the other end of the musical scale, and back on this side of the pond, we chat with some of the UK's up and coming young jazz drummers.

In a really packed issue this month, we also interviewed session madman Robin Guy, Airbourne's Ryan O'Keeffe and The Undertones' Billy Doherty! All this plus expert reviews of new gear by Zildjian, Paiste, Ahead and Worldmax, as well as the revamped Pearl Export kit. And you can learn to play tracks by Bullet For My Valentine, Bruno Mars and Aerosmith! No need to thank us, it's our pleasure!

The August issue of Rhythm in the shops, available online from myfavouritemagazines.comand at Apple Newsstand for iPad.

Cara Delevinge may be best known for being a clothes hanger with eyebrows, but it turns out she's got some pretty impressive stick skills, which she showcased at Selfridge's recently. All in the name of make-up.

We recently chatted with Matchbox Twenty drummer Stacy Jones. As well as being a seasoned sticksman, Stacy is also an experienced MD and producer. He shared a story with us which shows that rock'n'roll ain't all glitz and glam.

"I was producing a band for a TV show called Laguna Beach. They had to go to New York and perform on TRL, which was a big show and they had never done live TV. Their management asked if I would help them rehearse. I went down and their songs were melodic rock and the guitar player had a Strat with a really clean sound with a little distortion pedal, they had everything wrong for what they wanted to do. I called management and said, 'Let me have your credit card and get these guys what they need.' I did that and ended up playing guitar and singing background vocals with them, but off camera. I literally stood in a janitor's closet next to the stage at TRL! I stood in a f***king closet with a Marshall half stack with me and I was stood next to a mop in a metal bucket!"

It was quality over quantity in the Rhythm photo studio this month as we snapped a handful of stunning products. Top of the pile was the new Yamaha Live Custom kit as well as a couple of new additions to Yamaha's e-kit line up. As always, keep your eyes peeled for reviews of those in coming issues of Rhythm. We also shot a stack of heads from Aquarian that you will be able to win in next month's Rhythm.

Drum cover of the week

Casey Cooper's cover of Muse's 'Panic Station' is pretty sweet, but we like it particularly because he's got himself a brand new Pearl Export to play it on, which looks and sounds great. Great bit of bass playing from his friend Marta, too.

If you've done a drum cover you're particularly proud of, or if you've seen an awesome one recently - email us atrhythm@futurenet.com!