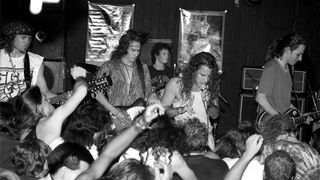 Released in August 1991, Pearl Jam's Ten went on to sell more than ten million and helped take grunge right to the heart of the mainstream.

The album's biggest single, Alive, remains as anthemic today as it was on release. The man behind the kit for both single and album was Dave Krusen and here he talks us through the making of Alive.

"The drum tracks for Ten were recorded in about two weeks. They were recorded in Mountlake Terrace, Washington (about 30 minutes north of Seattle) at London Bridge Studios. We went in on 11 March, 1991, which was the day after mine and Jeff Ament's (bass) 25th and 28th birthdays respectively. The following day my son Mickey was born, so it was an intense time for me personally."

"The first time I heard 'Alive' was on Stone's (Gossard, guitar) demo (I think it was a home recording with some friends). I was blown away by the riff right away."

How did you approach the track? What made you play the parts you did?

"The one thing I did that was a lot different to the drums on the demo was that I sank into the guitar riff, deeper and looser. That riff is the essence and vibe of that song, and it just played itself. Honestly, I just went along for the ride, it was a very easy song to play.

"Obviously the vocal melody is great and the lyrics are brilliant, but that riff is so immediately recognisable because it's so huge! There was no click either, and that allowed that song to breathe in the way it does, especially at the ending. It was as live as it gets."

What setup were you using at the time?

"The set-up I was using at the time was a new four-piece Ludwig kit (from around 1989 or 1990). It had a 22"x16" kick with a Remo white coated Ambassador head with a Danmar kick pad, an 12"x11" rack with a clear Remo Pinstripe head, a 14"x13" suspended floor tom, which also had a clear Pinstripe. On 'Alive' I used a 1968 Ludwig polyphonic snare, with a white coated Ambassador cranked as tight as I could get it. I was, and still am, a huge Steve Jordan fan. On all the other songs I used a 14"x5" maple Noble & Cooley snare, because the producer didn't like the Ludwig. I thought it sounded cool, myself. I used Vic Firth SDS 9 Driver maple sticks on that song. The cymbals I used on 'Alive' (and the rest of Ten) were all Sabian. I had an 18" AA Thin crash, a 20" AA Heavy ride, an 18" HH Thin crash, a 20" AA Thin Chinese, and 13" AA regular hi-hats."