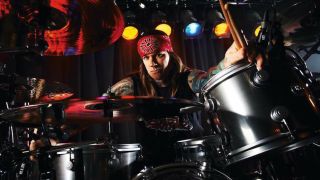 The rise of Steel Panther has been as rapid as it has incredible. The shock rock heroes have burst out of the club scene and recently even headlined a sold-out show at Wembley Arena.

So what's the secret? Drummer Stix Zadinia sat down with us ahead of a recent show at Leicester's O2 Academy to share his top tips on how you can go from back room bar gigs to jam-packed arenas.

Get a cool looking kit

Make sure it sounds killer

"I have a gold kit that is also maple mahogany. My sound guy and I love the sound of those drums through the PA. They're a little more cannon-y and open sounding than other woods. And of course you can't mess with DW."

Think about your hardware

"I've got the custom Tom Winch rack and that has become my set-up. It's incredibly functional, there's so much space saved and there's not a big bar going out in front of the kit. It looks killer and works great. Having a big bar across your kit can be alienating, like, 'We're here, you're there.' With the kind of band that we are I prefer people to think that we're all in it together."

"When you're coming up in clubs and backyard parties... I play hard because I grew up trying to play loud because I didn't play through PAs. Nobody steps out of the practice room into Wembley. You have to work your way up. If you're playing rock or metal you want to be loud. I noticed when the room gets bigger I don't have to hit as hard because we're on a big PA and I can feel the air in the room. It becomes a lot more relaxing because nerves can become overwhelming and your arms can tighten. We've been playing these larger shows so I'm getting used to controlling the heart rate and my breathing."

"We open with Pussywhipped, so I have a practice kit back stage. Going out cold on that song is not a good idea so I need to play a little before I go out there."

Make the most of your sticks

"I used to buy sticks one pair at a time and I would shred them right down until the middle of the stick was a tiny slither. When I broke one I would have to go buy a new pair and it'd be, 'Awesome, I've got three sticks now,' and then I'd break one and think, 'Still got a pair!'"

"On this tour we have a nine foot white grand piano. It won't fit on the stage we're playing tonight though so you guys get the keyboard stand. That's such bullshit. From here we're bring more lights to the show, the lights make for a cooler vibe. We can't come out and do the same show every time, that is really important to us."