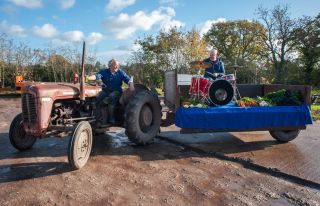 Greetings friends, drummers and farmers! As always, I hope this finds you all well and in good health.

Since getting into juicing (and aiming for healthier REAL "whole foods") my intake of fresh fruit and vegetables must have trebled and the weekly shop for produce has led me to some great local farm shops and funky farmers markets.

Like with any gig and venue, if you visit enough times you'll eventually gravitate towards like-minded people and build up friendships… and this is very true of my special guest and 'friend' this week.

We met after I started buying produce from his stall at Woolton Village farmers market (near Liverpool) about a year ago where he visits once a month. I told him about my juicing journey and how difficult it can be to purchase good quality produce (and especially good kale)… and he had good kale!

Our friendship was sealed and I became known to him as "the kale man". I occasionally take him a freshly made juice to try (using his produce) and he genuinely seems surprised with how good it tastes and is excited about another avenue for his produce.

While he's NOT a drummer or health nutritionist, I wanted to share his 'hard work' daily routine and passion for feeding the local community (via produce grown on his farm) to remind us ALL how important it is to support our local businesses.

Friends… please give a warm welcome to farmer John Jones!

"Hi ! my name is John and I am a grower from the Wirral.

"I suppose farming goes back to my grandfather to some extent, as about 100 years ago they used to grow fruit and vegetables and sell them in Ellesmere port. I've always been involved in the farm, even when I was at school I would help out in school holidays.

"A normal working day starts around 6.30am on the farm, unless I'm going to market… then it can be 3am. The biggest hurdle of the modern farmer is the marketing. Just going back to my mother and father's day, they supplied to the wholesale markets and then it went to the small shops.But over the last 25 years things have shrunk dramatically as the supermarkets have dominated fresh fruit and produce.

"We have supplied wholesale to the markets in Liverpool (also to secondary wholesalers in Birkenhead, Chester and North Wales) and through the greengrocers shops throughout the area. But, we've gone back and down the route of the farmers markets where we probably serve up to almost 2,000 people a month.

"It's quite heartening really as the customers appreciate local produce… they like to know where the produce comes from and they certainly like to talk to the person that has grown it (or harvested it).

"We find a lot of people at farmers' markets like to find out where we are, the history about our farm… so it made sense to have a website to explain all of that info to them. We just launched the online ordering - very simple and very basic - but the idea is the people can go on online, order their produce and we will deliver it within a three-mile radius of the farm.

"We grow over 40 different types of crops… I think people are becoming more adventurous with their food because the chefs on TV are experimenting and encouraging people to try all these types of REAL foods.

"In my mother and father's day, the graft was probably harder and maybe even a little bit longer… but the marketing was easier. They used to load a horse and lorry and take it three miles down the road and sell the produce they'd grown… and here we are having gone through supplying the supermarkets and the internet has almost taken us back in time to get back to doing the same thing. The internet is such a big thing and a global thing and makes the world so much smaller - the irony is that you can use it just to serve your next door neighbour with a box of vegetables!"

IF MUSIC BE THE FOOD OF LOVE, JUICE ON!

"I have to say first and foremost that I am not a disciple of any one type of music, so tunes and bands I enjoy owe more to moods and situations than to musicianship (even the cheesiest songs can conjure up a moment in time) but I guess everyone has the soundtrack of their life in the background (almost like a sense of smell)."

"I remember at the age of about six being ill in bed one Saturday and about three o'clock in the afternoon I heard Engelbert Humperdinck singing 'The Last Waltz' and wondering where it was coming from… I came downstairs and found that mum and dad had bought our first record player - such excitement, fascination and happiness.

"I was brought up in the '60s and at that time it was almost a given that one should follow on into the family business - it was something I never really questioned.

"I did consider other avenues and my parents never pushed for me to follow… but, there are always things that need to be done on a farm.

"Back to the soundtrack… In the '70s everyone was into T.Rex, David Bowie and Deep Purple and if you wanted to be "IN" or "IT" you carried an album under your arm - which wasn't me!

"Then the mid-70s came, and disco which meant parties and girls (woohoo!)… whenI went to see ELO at London's Wembley Arena introduced by Tony Curtis, I felt priddy darn kewl.

"Here I am writing this and claiming not to be that devout in the worship of music, but thinking back I was there every Sunday night to hear "My name is Tom Browne and this IS the top twenty as compiled by the BBC" - so important to know what was moving up or down!

"So into the '80s and I got to see Elton John and Ray Cooper at Theatre Royal Drury Lane… positively intimate when you look at arena shows these days.

"Then it was The Jam (I love the driving beat to 'Town Called Malice' ), Meatloaf, Supertramp, Genesis - but having said all that, I was still quite happy to listen to 'A Weekend in Ireland' with Leo Mccaffrey whilst having tea with Mum and Dad."

" I think the most popular recipe I did at home this year was with fresh Strawberries. I brought some home for tea, took the stalks off and washed them ready to eat whole… then Charlie and Nat (my family) let me know they were busy with friends, so I froze them 'til the next day.

"I placed the frozen strawberries in a high-speed blender and whizzed them adding fresh cream to the frozen slush (and 'a bit' of sugar)… instant ice cream, instant hit and 100% good!

"The other success was Kale crisps:

* Wash the Kale and pull leaves off the stem
* Place on a tray and drizzle a little bit of olive oil on them
* Place in oven and heat on 90-100 degrees for about 10-15 minutes
• Season and serve (shake some parmesan style cheese on the top is my fave).

"Then there is Chard, plain or rainbow (red orange & white) - we cook it in two halves.

If you're on Merseyside you can viisit John at a Farmers market.