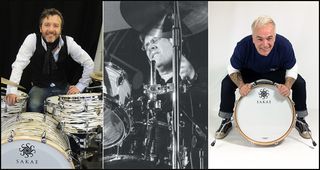 This trio of top UK drummers will bring their large personalities and amazing drumming skills to the stage, playing to some of their best-known tracks and entertaining with anecdotes from their time in the music industry. You'll pick up invaluable drumming tips and learn from their knowledge and experience in the UK drumming scene. You'll also get the opportunity to grill each drummer after their performance in a series of onstage Q&A sessions.

Ash Soan is one of the UK's top session drummers. As well as a glittering history of sessions with international stars such as Adele, Celine Dion, Seal, Cher, Cee Lo Green, Robbie Williams and James Morrison, Ash appears on our TV screens every Saturday night occupying the house band drum seat on BBC's 'The Voice'. Ash is also currently touring the UK with his former band Del Amitri.

Phil Gould is a drumming legend, known worldwide for his writing and playing skills in the band he co-formed, Level 42. A stalwart of drumming clinics, Phil never fails to impress with his influential drumming style.

Mark Richardson is best known as one-quarter of popular rock band Skunk Anansie. His intense yet controlled drumming style, along with a healthy 6 million record sales worldwide for Skunk, Feeder and Little Angels, has won Mark many loyal followers. Mark is the latest addition to the coveted Sakae Drums roster.