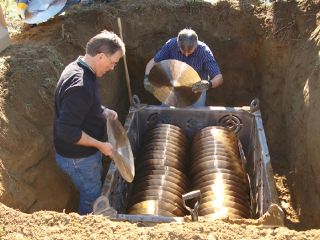 Cymbal-giants Sabian has buried 100 of its premium Vault Artisan rides as a sound-shaping experiment. The 100 bronze discs will be dug up again and sold later in the year after the freezing conditions of the Canadian winter has taken its toll.

To the uninitiated, this might sound like a random marketing ploy. But Sabian claim the company receives "hundreds of queries annually regarding the aging of cymbals by burying them in the ground." Sabian's Peter Stairs even goes as far to say that "buried cymbals are the stuff of legend."

"Anecdotal comment indicates that aging the cymbals by burying them in soil actually helps shape their sound," continues Peter Stairs. "Of course we are as curious as anyone to see what these cymbals sound like when they're pulled up from the earth."

"They will have endured about eight months of dry, wet, hot and cold soil including the freezing temperatures of our Canadian winter. We anticipate they will be dirtier looking, and if what the legend says it true, they may be dirtier sounding as well."

It's interesting (and refreshingly honest) that Sabian don't even pretend to know how the cymbals will turn out. Still, if James Trussart's custom 'buried, weathered and fossilised' guitars are anything to go by, there'll be discs of rusted beauty.

Sabian's project is called One Of 100: Unearthing The Legend. Excavation is set for 1 June but you can purchase one on a first-come-first-served basis from 5 March for $800.