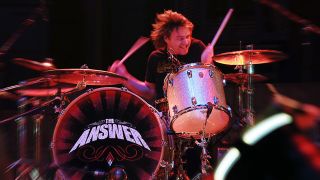 James Heatley of The Answer in full flow...

From John Bonham and Neil Peart to Ian Paice, Dave Grohl and everyone in between, rock drumming boasts an illustrious line-up of celebrated players.For most drummers their entry point to the instrument is the basic 4/4 beat so it's no small wonder rock continues to make its way into the record collections of beginner and seasoned drummers the world over.

What do you think makes a good a rock drummer?

Jason Sutter: "Really good rock drumming has to swing. It has to feel good even if it's heavy or hard. Classic rock records like AC/DC's Back In Black or classic rock drummers from John Bonham to Simon Kirke all swing. That's something I feel I've just figured out but also something I've always been attracted to because it's what makes other musicians, and ultimately the audience, gravitate to you."

Dean Butterworth: "A rock drummer is someone who has the best job in the universe. For me the ultimate rock drummer is Stewart Copeland. The way he plays his hi-hats, the syncopated patterns on the bell of the ride, his speed, musicality and power as a drummer drove The Police."

In terms of technique, rock may not be as complex as other genres but is there a skill to maintaining a steady beat for an entire gig?

Glen Sobel: "I absolutely believe there's an art to maintaining a steady beat and dynamics throughout a song. Many jazz, fusion and prog drummers look down on rock and pop drumming as if it's too simple; to play it would be doing a disservice to their craft. These drummers usually aren't gigging that much."

Does being a hard hitter mean you have a more powerful sound?

Dean: "I don't believe you need to beat the hell out of the kit for the drums to sound huge. If you hit the drums too hard you choke the tone. Same with cymbals. You could jump up in the air and come down on a crash cymbal and yes it's loud, but you could also sit behind the drums and hit the same cymbal with a sharp snap of the wrist and get the same volume from the cymbal."

Glen: "The shell and head can only handle so much before the sound starts to become unpleasant. This occurs more often in the studio but can also relate to live performance. Certain drums and cymbals respond better when a drummer backs off in their attack. This relates to the idea of relaxing or playing with what I call 'relaxed intensity'. A great example is John Bonham on Led Zeppelin's Fool In The Rain or All Of My Love."

What techniques help build power behind the kit?

James Heatley: "For me, power comes from fitness. I go running three times a week. Even if it's like 45 minutes, it's obviously going to help me play full sets. When we were on the AC/DC tour we'd play for 45 minutes and they'd have the next two days off. But on those days off we'd be playing our own gigs for 90 minutes. To maintain the level of fitness needed for our solo shows, I'd get off stage from AC/DC, get my running gear on and go running around these stadiums while listening to them play in the background."

Dean: "You build power and stamina as a drummer by working hard. I work in my practice room for a couple of hours a day, hit the gym for an hour, then do an hour of rudiments on a pad. When on the road I do a few hours on a pad, play the kit at sound check, then play the show. The drums are a very physical instrument so I believe in staying fit all round."

Glen: "It's hard to practise playing hard rock or metal on your own in a small practice space. It doesn't make as much sense as it does to actually have the band there to inspire you to play louder and with rim-shots and so on. Get with a heavy rock band band that rehearses regularly and you'll be surprised at what happens to your playing."

Jason: "I practise every day and give a certain amount of my practice to that art form. I also go out on stage as we have a Kabuki covering the front before we go on, so I practise my feet at least 20 minutes a day before every show. It comes down to discipline and how hard you want to work."

Were there any techniques you struggled with?

Jason: "I'm trying to get better at double bass drumming. It's something I toyed with in high school but found that when I played a set that didn't have two bass drums, I was a bit lost so I tried to play with a single pedal and create a double pedal sound. Lately, and especially on my current gig with [Marilyn] Manson, I've been required to play double bass proficiently. I practice every day - it all comes down to discipline."

What are your top three rock drum solos or beats?

Glen: "John Bonham on Moby Dick is one. Between hearing that and Neil Peart's YYZ solo on Rush's Exit Stage Left I knew drums were beyond cool. Steve Smith's solo on one of the Journey live records from way back when was a big deal too. He was able to fit in a lot of poly-rhythmic and odd note grouping ideas while still keeping it entertaining for the crowd."

James: "I can't pick my three favourite beats of all time because there are too many, so my top three this week are The Sky Is Falling by Queens Of The Stone Age, Straighthate by Sepultura, and Crucial Velocity by Clutch."

For someone looking to get into rock drumming, what would you recommend in terms of buying their first kit and accessories?

Glen: "It doesn't have to be a top of the line kit. In fact, if a lower level kit is purchased that student - with the right teacher - will learn how to get a good sound out of the drums without relying on expensive gear. If it's for potential rock gigs then it shouldn't be a kit with small jazzy sizes and shallow toms. Larger crash cymbals and a ride with a good 'wash' sound are important. But a good drummer can get a good sound out of almost any kit."

Dean: "I can suggest using what I love: Tama drums and hardware, Paiste cymbals, Pro-Mark sticks and Evans drum heads. I was always drawn to playing the gear my heroes played, so why not make a list of three or four of your favourite drummers, see what they play and build your kit from that?"

Many extol the importance of thickness of shells, the make-up of the wood, even the grain. Do you get that forensic about your gear?

Glen: "I don't get that into wood types and thickness of shells. There's so many other factors like room temperature, mic placement, types of mics, head combination, the band you're playing with, is it an indoor or outdoor gig? I always like to plant the idea in students minds that your sound comes first and foremost from you - your touch, attack and attitude. Having the right gear for the gig is important but without a good sense of your personal affect on the drums it wont matter what you do."

How important is showmanship when drumming?

Dean: "Not as important as playing in time. If you groove suffers, it's lame. If you can do both, killer!"

Jason: "I think you should be aware of who you are auditioning for or playing with and try to at least be hip to what their look and vibe is so that you can fit in. That said, keeping your individuality to an extent is essential to creating a style and a voice as a musician and as an artist."

Glen: "Showmanship without musicianship is a dead end. The music is first. You can't see stick flips on a studio recording. On the other hand, a drummer needs to look like they're putting on a show if a touring act is considering hiring them. Sometimes this has nothing to do with stick tricks but rather how the drummer looks when they play. So often people 'hear with their eyes'. If you look like you're putting on a great show, your image fits the band and you are genuinely into it, others will be too."

Image: Dean Butterworth taking some time out from playing with Good Charlotte

The Clem Burke Drumming Project has shown that a drummer's fitness is on par with a pro footballer's. How do you maintain stamina through high-octane sets?

Dean: "I eat well with lots of fresh fruits, water and salads. I hit the gym and do lots of cardio, practice on a drum pad and drum kit, and stretching is really important. I feel you have to be ready to play any set in any order. Just make sure you have good conditioning and you are relaxed."

James: "On tour we eat pasta every night, like a footballer, and on stage I drink Dioralyte. About six years ago we were playing a show and my forearm seized up halfway through. I was able to play on but I wasn't happy. A doctor said I was losing too much salt through sweat, so I drink Dioralyte to stop it from happening again."

Glen: "It's important to get enough food and rest on tour. I do take supplements and try to stick to a regular workout routine. The Alice Cooper gig is challenging for drummers for the reason that Alice doesn't break character and doesn't talk to the audience between songs. It's usually one song right into the next so my stamina level has to be high. The first couple of shows of a tour are definitely harder than the 30th show because by then the conditioning is there."

Read part two of Rock drumming: the power and the glory here.