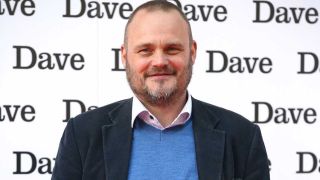 Al Murray is a man of many talents. Stand-up comedian, TV personality, sitcom writer, he's even had a crack at politics.

And, as those of you that read our recent interview with Al and his percussive partner Andrew Prestidge will most certainly be aware, he's a pretty handy drummer, as well.

So, as a multi-talented sticksman of note he's well-placed to put his case forward for why Ringo Starr is a grade A drum hero.

"Before I knew what Beatles were or what Beatles meant I knew the album Abbey Road. And before I knew who Ringo was or what any of that meant, or any of that nonsense that gets tediously repeated about Ringo, I knew he was a great drummer. Come Together folks. A part that perfectly encapsulates the drummer's art - it sets a scene, it grooves, it grows, it serves the song, it is full of personality and it can't be anyone else.

"Because a lot of nonsense gets said about Ringo. Time to time on Twitter I've found myself determined to defend him from a sea of people I can only really describe as idiots. "Shit drummer" is the basis of the counter-argument about Ringo. It's almost not worth addressing, you'd have thought him being the drummer in the most important band of all time would be enough. But not for some. You find yourself having to say well yes I love Neil Peart too, but he's no Ringo. And similarly Keith Moon - who is a drumming law unto himself - no, I can't see him playing in the Beatles to be honest. And then The Stones fans surface. Other people suggest - when I post that Ringo is one of the greatest of all time - that he wasn't a patch on Buddy Rich, well, yes, but it was Buddy who covered Norwegian Wood.

"Let's not forget, the band recruited him. He was head-hunted to play in The Beatles. And every time, there he is pushing and pulling the band along, illustrating, staying out the way when needed, filling in when the space called for it (A Day in the Life,anyone?), going all the way with the band's sonic experimentation that came along with Revolver (Tomorrow Never Knows), and all the time with gallons of swing and groove, the immediate 'tell' of British drummers who'd grown up with swing music everywhere. And where Ringo and The Beatles led, all followed: even if by reacting to The Beatles and rejecting them, everything since has been in the band, and Ringo's shadow - whether you like it or not Peart fans!

"These are reasons to love Ringo, but what is even more wonderful about him is how much he plainly loved playing the drums, how much he enjoyed it, and how cool he made it look. You seldom see him biting his lip, his brow furrowed in concentration, he wore his talent lightly and an ecstatic smile too. To be frank, if Ringo was crap then I'd happily take being half as crap as Ringo. As the great man might say whilst refusing to sign you an autograph: PEACE AND LOVE MAN, PEACE AND LOVE!"

Read more on the genius of Ringo Starr in the Summer issue of Rhythm, which is available here!