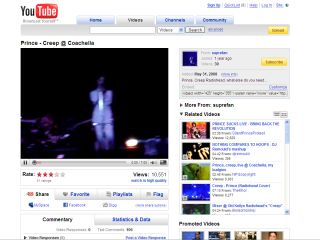 Prince's Creep: could it be heading back onto the internet?

More than nine months after he performed it, it seems that Prince could be set to reignite the row over his cover of Radiohead's Creep.

Prince's much-talked-about version of the song was aired at the 2008 Coachella festival and, predictably enough, videos quickly appeared on YouTube.

However, Prince wasn't happy about this, and requested that the clips be removed. Thom Yorke responded by asking for the performance to be put back onto YouTube, which sparked a debate over who actually owned the copyright.

That, seemingly, was that, but according to Rolling Stone, Prince is now planning to put a video of his Creep performance onto his new website. Is this happening with Radiohead's blessing, we wonder, or could another dispute be on the horizon?

Rolling Stone has also published a shot of what appears to be the cover art of Prince's new Lotus Flow3r album, one of three that he's planning to release in 2009.