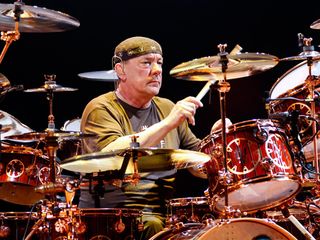 When we last spoke with Rush's Neil Peart, he was about to let loose for Drum Solos Week on The Late Show With David Letterman, during which he was planning to strike a balance between compositional and improvisational playing.

On Rush's upcoming Clockwork Angels, the renowned sticksman is leaning more towards the latter approach, as he reveals on his official website: "As we prepare to start mixing in the New Year, it is too early to say anything about the results. (I once described mixing as 'the end of waiting,' while Geddy calls it, 'the death of hope.')

"About the process, though, I can't resist spilling a little. It was our second time working with the production team of Nick 'Booujzhe' Raskulinecz and engineer Rich 'Tweak' Chycki. Beginning with a confident level of trust allowed us to reach higher, and I recorded my drum parts in a way that, for me, was completely different than ever before.

"Even right up to our previous album, Snakes and Arrows (2007), my method was to take a demo version Alex and Geddy had made of each song and play along with it many, many times. I would experiment with possible rhythms and decorations, and gradually organize them into an arrangement. At that point, I might start recording demos myself—often with Alex as engineer—and improve them over time, with input from my bandmates and coproducer (Booujzhe, in that case).

"(A reminder about that nickname: Nick likes to suggest outrageous fills for me to play, and he will mime them with wild physical gestures and sound effects: 'Bloppida-bloppida-batu-batu-whirrrrr-blop—booujzhe!' That last being the downbeat, with crash cymbal and bass drum.)

Peart writes that he has been focusing on a more spontaneous style of drumming and that "these sessions were an opportunity to attempt that approach in the studio. I played through each song just a few times on my own, checking out patterns and fills that might work, then called in Booujzhe. He stood in the room with me, facing my drums, with a music stand and a single drumstick—he was my conductor, and I was his orchestra. (I later replaced that stick with a real baton.)

"Rush songs tend to have complicated arrangements, with odd numbers of beats, bars, and measures all over the place, and our latest songs are no different (maybe worse—or better, depending). In the past, much of my preparation time would be spent just learning all that.

"I don't like to count those parts, but rather play them enough that I begin to feel the changes in a musical way. Playing it through again and again, those elements became 'the song.'

"This time I handed that job over to Booujzhe. (And he loved it!) I would attack the drums, responding to his enthusiasm, and his suggestions between takes, and together we would hammer out the basic architecture of the part. His baton would conduct me into choruses, half-time bridges, and double-time outros and so on—so I didn't have to worry about their durations. No counting, and no endless repetition. What a revelation! What a relief!"