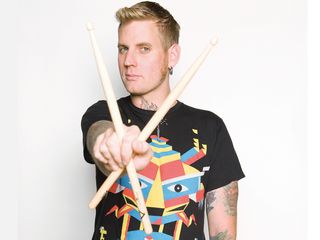 While Mastodon's new album Crack The Skye is streaming on MySpace, Rhythm magazine have been talking to drummer Brann Dailor about its recording. Dailor, you see, used clicks for "the first time ever," and was pleasantly surprised with the results…

"I used a click on this album for the first time ever. I'd always really shied away from it. It scared me to be honest. I'd always seen clicks as being for 'pro' players, and I don't really see myself in that bracket."

MusicRadar recently discovered a tool for revealing those drummers who play along to clicks in the studio. And while a huge number do (and there's nothing wrong with doing so, we hasten to add), it's interesting to hear the trepidation faced by even a seasoned pro.

Playing without a metronome or similar has its advantages, but Dailor offers a strong case for using one. Keeping in mind the needs of his band mates, too: "I have to admit that me not using a click had presented us with a few problems in the past."

"With a lot of our songs they'll start with a theme, then go somewhere else with a heavier feel, then return to the first theme again. And so I have to be careful that when we return to that part, it's at the same tempo as we started."

"But it worked great. Turns out that I've been avoiding it for no reason all these years."

You can read the full interview - and interviews with fellow modern sticksman Thomas Pridgen (The Mars Volta) and Chris Adler (Lamb Of God) - in the new issue of Rhythm magazine, available now.