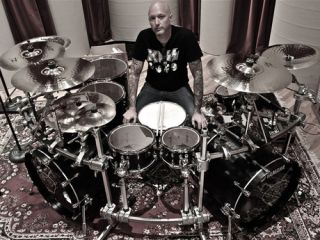 Having spent fifteen years behind the kit for Californian metal icons Machine Head, there are few better people out there to quiz on the ins-and-outs of metal drumming than Dave McClain.

Evidently, it's not just us who thinks so. Our good friends at Roadrunner Records recently set up a rendezvous between McClain and Jack Pritchard, drummer with fast-rising Welsh rockers Revoker - who released their debut album on Roadrunner earlier this year.

Jack took the opportunity to pick-up some drumming tips from a veteran metal sticksman, and you can read the whole conversation below.

In related news, both bands have upcoming UK tours - check out a full list of dates after the interview. Also, our friends at Metal Hammer have just released an exclusive special-edition fanpack version of Machine Head's brand new album Unto The Locust. Check out full details and order the fanpack here.

Jack: What drum equipment are you currently using?

Jack: How do you prepare before a show?

Dave: Not a whole lot. I have an electronic kit backstage, but it's more of just something to have fun with, like playing along to my iPod. But I really don't have a warm up regiment that I do.

Jack: Do you use different stick techniques when playing? If so, which?

Jack: Do you play double kick with your heel down or up off the floor? Do you have a technique?

Dave: I play heel up. I always have as far as I can remember.

Jack: As you didn't play to a 'click' on the album; what are your tips for keeping good time and not getting carried away with the adrenaline rush when playing?

Dave: We don't use a click on recordings or live, but I think it's really important for drummers, or any musician, to be able to play along with a metronome. It's a good way to see when you're speeding up or slowing down on parts.

Also, just listening to live recordings of your band helps. It's hard to tell when you're doing a show and the adrenaline kicks in and you start speeding things up. So, listening back will show you the parts that you need to concentrate a little more on your tempos.

Jack: How hard is the drumming on the new album?

Dave: There is some stuff that was pretty challenging to do. I feel like, in the last 8 years or so, I've really come into my own as far as drumming. I feel like I finally 'get it' after playing for 35 years. So, pushing myself has been challenging and really fun.

Jack: When you're not on the road, how often do you practice?

Jack: Who are your drumming idols?

Jack: Which recent metal bands have impressed you? (You don't have to say Revoker!)

Dave: Haha! I'm loving the Times of Grace album. Trivium - In Waves is in heavy rotation. And Ghost. Love this band!

Jack: Achieving all you have with Machine Head, what are your remaining ambitions?

Dave: My dream is to play music my whole life. It's always been and always will. There are so many more things for MH to achieve. I know this after touring with Metallica for a year!