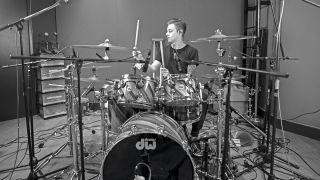 Most drummers aspire to something. That might be joining a band that plays a regular slot at the local pub. Maybe it's touring nationally, or playing the small stages at the big festivals. If you're Luke Holland, then one small ambition simply isn't enough and, at just 22, he has already achieved more than most drummers manage in a lifetime.

In 2012 he joined Arizonian metallers The Word Alive, applying his cutting-edge chops to their razor sharp riffs. But before his band career took off, in 2009, Luke set up a YouTube channel (Lukehollanddrums) having seen others performing drum covers he was sure he could top.

It was a move fuelled by teenage cockiness, but it's one that has paid dividends for his career. since its launch Luke has recruited a staggering 315,000 subscribers and over 48 million views of his excellently produced videos, mainly drum covers and remixes. the success and profile of the channel has landed him gigs and major gear endorsements and is still growing. Want to know how he did it? Keep reading...

"I started it in 2009. Initially, I had no intentions of it being an endeavour of any sort. I was covering metal songs I enjoyed at the time, drummers like Matt Greiner and Adam Gray. I started expanding to more popular music and that's where the following I'd already established thus far got to see what I could do as an individual, over songs that didn't have an actual drum track. I consistently put out content after that.

"The reason I started the channel is actually embarrassing to admit; I was watching Texas in July covers when I was 15, reading the comments and seeing the praise they were getting. I remember thinking, 'I could do way better. I want to prove myself.' Those were the naive thoughts of a 15-year-old kid. So I did it, not even thinking I would get more than 50 views. I just wanted those particular drummers to see the video!

"When I was 16, Adam Gray of Texas In July contacted me to fill in for him over in Pennsylvania. A volcano erupted in Iceland and covered the Atlantic, so nobody could fly one way or the other. He was stuck in Italy. He'd seen my YouTube covers online. I took a week off school and did it. That was definitely the turning point in my mind; 'Woah, I can do this for a living.'"

"I used to interact a lot more than i do now, partially because of how much free time i have throughout the day compared to before. my philosophy has definitely changed. i feel that if i focus on the content, image and the drums, the following will continue to increase accordingly.

"I think the biggest personal investment I've made when it comes to my channel is time. People don't understand how much time it takes to create one video, from getting my cinematographer, audio technician, location and my own schedules to align, to the amount of time it takes to learn or create the drum parts. It's pretty excessive.

"Replay value is absolutely crucial. Why would someone want to share this video, or show it to their friends? Sure, if you nail the drum part to a somewhat difficult song, someone might watch it once or twice. But how would it spread? That's why I started doing the stick tricks back in the day. Now, I focus purely on content and producing the best video possible. Location, sound, video and song choice."

"One video in particular, my cover of Animals As Leaders' Kascade took me two weeks of rehearsing, from learning the song to nailing the song. That's for sure the longest I've ever spent on one song. Then there are songs like my Ellie Goulding Bittersweet remix, which took me very minimal time. A lot of people remark about the passion displayed in that video. You know that feeling you get when you listen to a song you love the first couple times? That was still fresh while I recorded the video and I mostly improvised it."

"If you're like me and not very competent in the [video production] realm, my biggest piece of advice is to be a likeable guy and maintain and develop relationships with people who are competent."

"My most viewed video to this day is Skrillex's cinema. The song had just come out at the time and it was my second viral video. People were really into the song. I really showcased a lot of different techniques in that video. I think it got big primarily because of my alternating blast beat in the drop that I'm still asked about frequently to this day."