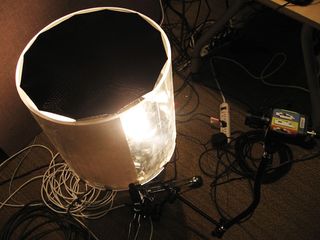 Jaime Oliver's 'Silent Drum' - but what is the point of a silent drum?

Jamie Oliver's the food dude, right? Yes, but Jaime Oliver has different fish to fry. The 'amusingly' named American inventor has scooped first prize in a music tech contest for his silent drum.

The instrument is a drum shell with an elastic spandex head, illuminated from the inside, that uses shapes and shadows to compute and control sound.

As the player pushes down on the spandex head, a video camera tracks the shape of the resultant shadows and sends these images to a computer. These signals are the parameters that control the sound of the instrument.

Oliver says the Silent Drum "opens up new possibilities for gestural control of sound, through the acquisition of traditional and non-traditional percussive gestures."

We'll settle for looking at Oliver's Silent Drum. (Although is this a 'drum' at all? - it looks/sounds more like a spandex Theremin to MusicRadar.)

If that doesn't whet your appetite, here's Jamie Oliver - chef and drummer - serving up some lukewarm indie-rock with his band Scarlet Division.