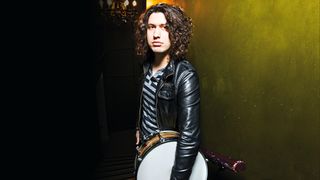 For 45 minutes on the evening of 23 May Rhythm cover star Ilan Rubin took part in a live Twitter Q&A session. Hundreds of question were put to the Paramore, Nine Inch Nails and The New Regime star, including a cheeky tweet from Paramore's Hayley Williams herself, resulting in plenty of quickfire drum-related tips, advice and opinion! If you missed it we've selected the best questions, and Ilan's answers below. Enjoy!

Don't forget you can hear loads more from Ilan in the latest issue of Rhythm. Find out where to buy it here.

Hey Ilan, any tips for improving double strokes and paradiddles? Need to work on my pace #askilan @rockitross

Make sure the strokes are coming from the wrist and not bounces off the head/pad.

What is your favourite fill to play right now? #askilan @Tim_Hib

I don't have one. Whatever fits the song.

So you're right handed, but you play open handed behind the kit, have you always played open, or pick it up over time? #askilan @‏DrummerAsh13

Always open handed but also always tried to do everything both ways.

Why is Paramore the best band you've ever played with? #askilan @yelyahwilliams

Did you ever go to a school? Did you do the whole jazz thing? #askilan @antonistheway

I want to learn playing drums. Any tips for a beginner? #askilan @MindTheSP

Take it slow and really apply yourself. Don't try to learn too much too quickly.

When is the new Angels and Airwaves record coming out?? #askilan @Swish3Pointers

There's no precise release date in the crosshairs as of now.

What size of snare drums are your favorites? Do you prefer the lower or the higher? #askilan @rayssalopes

How are the rehearsals with Nine Inch Nails going? Are you just playing old songs or jamming? #askilan @kiwdziu

Going through quite a few songs!

All of them. Taylor overdubbed some fun stuff on a song or two.

Is it hard to manage your time between two bands? #askilan @warnabhiru

Honestly no. I love working as much as possible.

How many years were you a DIY level touring drummer before you really broke through to landing bigger gigs? #askilan @devanbentley

The New Regime was a great discovery for me a few years ago. What's the meaning of Take Control for you? #askilan @pornosonico

If you don't want things to fall apart or crumble before your eyes, take control.

How long have you been an endorser of @QDrumCo ? Amazing sounds, great grooves. #askilan
@rayssalopes

I've been involved with Q Drum Co. for about 8 months now, maybe longer. The best.

What's the best thing about touring with Paramore? #askilan @ItsNatalie_W

What is your favorite song on @paramore's self-titled album? #askilan @nandoROCX

Do you have a favorite film score composer? #askilan @carbonmusic

John Williams. Melodies are too good.

When younger how did you practice? eg. exercises or mostly playing along? #askilan @rossb15

Bit of both! Aside from rudiments and playing along though it's important to just play and improvise using the things you've learned.

Hey Ilan, how do you go about tuning your 26" kick? I know Bonham used to tune it pretty high. Loving Exhibit A! #askilan @samsonite_evans

On the higher side but not tight enough to have a defined, sustained pitch.

What's the best and worst thing about being a musician? #askilan @stephenjevans

Best thing about being a musician is that I do what I love for a living. Worst thing is dealing with other musicians. Ha.

What was the first album you learned to play the drums to? #askilan @stephenjevans

Led Zeppelin I. Thanks dad.

I honestly place more importance on stretching over any kind of sticking warm ups.

What is your favourite NIN song to play? #askilan @ShoutLEsteve

Too many. Terrible Lie, The Becoming, Discipline, lots!

Are you planning a big tour (including South America) with The New Regime after NIN 2013-2014 tour? #askilan @porim

I'm trying to find the time to tour because I would absolutely love to. It will happen.

What was it like playing Woodstock '99 as an 11 year old? #askilan @iseeumonkey

It was fine. I hate to sound unappreciative but that experience isn't something I really cherish. So many better ones.

You don't use double pedals, do you? Heel, toe or slide? #askilan @rafdian

Only when the band calls for it. Heel up, slide, whole foot, whatever gets the job done!

You're a multi-instrumentalist. What other instrument would you like to learn? Is drums your 'first language'? #askilan @ClaireDavies_tw

I'd like to learn string instruments. Drums were my first instrument.

Do you do any cardio or weightlifting to stay in shape for live shows? #askilan @MorningView182

No, but thank god I play drums. No idea what shape I'd be in if I didn't!

Why do you use open handed technique? Are you left-handed? Btw you are very inspiring! The New Regime is awesome! #AskIlan @rafdian

When I started playing it made more sense to hit the hi-hat with my left hand since it was closer.

What's the best piece of advice you have for making a name for yourself? #askilan @drums_jack

The most important thing is to develop your skill and always give it your all when you're playing. Never know who's watching.

5 albums everyone should own (you can't say The New Regime!!) #AskIlan @PaulSaward

Led Zeppelin I, II, III, IV, Houses of The Holy.

Who, other than Mr. Bonham and Mr. Copeland, are your biggest inspirations/influences? #askilan
@samferguson42

Buddy Rich and Joe Morello are big influences when it comes to soloing type stuff. Love their style and skill.

Do you use a click a lot live? #askilan @chazmcleod

Always, but that's the band's call. It's pretty standard these days but I enjoy it.