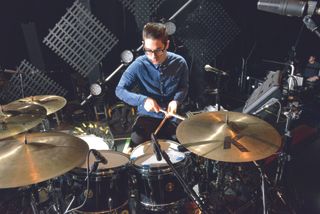 DRUM EXPO 2014: There are lots of jobs in the music industry. Depending on where your skills lie, there's something out there for you right now - even if it's in a work experience position to begin with while something more permanent (and paying) opens up.

So what if you're a drummer who's also got their eye (or ear) on expanding into musical director (MD) territory? It's a smart move, and one that could future-proof your career. Joe Clegg, who holds down both roles for international pop sensation Ellie Goulding, explains how he got his big break.

How did you land the role of drummer and musical director for Ellie Goulding?

"I was searching online for new music that I connected with and found this girl called Ellie Goulding doing a cover of the Bon Iver track Wolves. It was just her and an acoustic guitar and I fell in love with her voice.

"I found her MySpace page and there was no indication of it being professional - she didn't have a record deal at the time. There were a couple of tracks on there and a message saying she might be looking to do some shows with a band. I sent her a message and a week later she got back to me and put me in touch with her manager.

"Her manager emailed a couple of weeks later. I think they loved that I'd discovered her myself. I got on the Megabus to London and met them over a coffee. Ellie's manager explained that the head of Polydor had signed her and they were looking for a drummer. They were clear there was hardly any money in it at that point."

Was there a connection between yourself and Ellie from the start?

"Ellie was really cool. We were having a chat and it was going well. I had my phone on the tabletop and my wife sent me a message and her pictured flashed up. Ellie asked who it was, I told her I was married and from there I talked her through my story and in that moment we clicked. Two weeks later I auditioned."

What preparation did you put in for the audition?

"I went back to Lancashire and thought, 'This is it.' But I went home and realised all my gear was in bits. Having heard the demos I thought if I bought an SPD-S I could sample some stuff. I had Ableton Live but no audio interface. I had no money to buy these things, and was it wise to spend money for a shot-in-the-dark audition?

"My wife must have spoken to her grandma because she came to see us and gave me a cheque for £1,000 and said, 'We believe in you. If this is something you need to do, go do it and we will support you.' I was blown away - I had to go for it then.

"I bought an audio interface, fixed my in-ears, upgraded Ableton and emailed Ellie's producer and asked if he would send me the stems of the tracks, the drum beats and all the melody channels and synths because I had an idea. He sent it through and I taught myself how to use the equipment."

How did the audition pan out?

"I played the tracks as a drummer along to the CD. There was some excitement in the room and I felt a connection. I said I had all of this gear with me and that I had an idea of how it could work. I started the track for Starry Eyed and sampled out the kick drum and snare through my SPD-S.

"I'd taken out all the bits I was going to play live and just went for it. A lot came together for me during the audition. I got the self-belief that I could do it. Within a month of meeting Ellie we did Jools Holland. Two months before that I almost gave up on music."

Were you musical director from day one?

"Pretty much. I was doing all the playback and sampling of tracks and all of that. Early on, Ellie's producer Starsmith was in the band, so he was kind of in charge but he wanted to produce, he didn't want to be a touring musician. He must have said to Ellie's manager that I had it down and they should ask me to be MD. It was probably about three or four months in."

How important is the relationship between an artist and their MD?

"The relationship of me as an MD and Ellie is the most crucial thing. When you come to see the gig, everything you hear is my work and the way the set works from beginning to outro is mine. It's incredible that I have been given that responsibility and that level of trust."

You have a lot to think about up on stage. Is it a case of spinning plates?

"I've wanted to be a drummer my whole life and now I find myself as a musical director. I lead the team, spending hours, days and weeks in pre-production for a tour. When I press play to start the show every night, I play drums but I have to listen to the bigger picture, read Ellie to make sure she's happy, and communicate with the band and the playback guys. Weirdly, playing the drums is the last thing I think about on show day."

How important is the relationship between you as MD and the rest of the band?

"The guys on this gig happen to be fantastic players. We have three people who play more than one instrument very well. All can program. All can MD. It's easy for me to communicate ideas with them. I've flourished in part because of the people around me. Being MD isn't a dictatorship, it's a team effort."

What is the main skill any drummer dreaming of becoming an MD should work on?

"Spend time on your musicality. I found that you can go so far with what you've learned in terms of technique, but that only goes as far as your musicality allows. It's about how you interpret other people's vision. You need to work with other musicians and understand the skill-set you need to lead a team."

For more great interviews with the world's best drummers, check out Rhythm magazine.