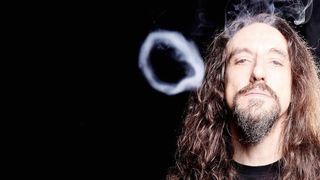 Just what is it about comedians and drumming? We all know that Al Murray is a dab hand with a pair of sticks, John Thomson is also an accomplished player, and it turns out that heavy metal loving funnyman Steve Hughes is also a keen tub thumper.

So much so, in fact, that he has a pretty impressive history behind the kit, having played for a slew of metal bands before turning to stand-up. As he gears up to bring his While It's Still Legal tour to the UK, we thought we'd put his love of drumming to the test and asked him to pick out his five greatest metal drummers of all time. Here's what he had to say (and check Steve in action below)…

"In 1982 I, like many others, became obsessed with Iron Maiden and, of course, the pounding drumming of Mr Clive Burr. His drumming is just so powerful and tight and just perfect for the songs. He adds a dimension and a strength to Maiden that Nicko McBrain just doesn't have. He is rock solid, whereas Nicko is more flighty and jazzy. But to add to Clive Burr's solid-as-f*** beats, he has a delicacy and preciseness on the hats that to this day sounds otherworldly. To me, he made those three Maiden albums he played on just bristle with an addictive energy of pounding metal strength and supersonic drum rolls that got me into not only drumming itself but music in general. A true legend - may he rest in peace."

"Vinnie Appice has probably played on many other albums I know nothing about, but his drumming on the first two Dio albums is the drumming I was most influenced by and spent hours annoying the neighbours as I clumsily tried to play along to his brilliantly eccentric yet solid playing. His drum rolls were just mind-blowing to me - big long multiple tom rolls that went forever and bounced around in weird directions that collapsed in on themselves yet came back in on the beat perfectly. He also played with great atmosphere, which is something a lot of the musicians I like do. He doesn't just play the drums; he plays the songs."

"Les Binks is probably the best drummer Priest have ever had. Many would debate me and more than likely go for Scott Travis, but for records that affected me, Unleashed In The East is an almighty album of classic metal songs and great drumming by Mr Binks. The sound of his kit is just so tight and epic, and he gave the songs a stylistic maturity with his classy beats and grooves. The controversy surrounding overdubs on what is supposed to be a live album is irrelevant to me as the whole record is just so massive and stadium sounding. It made me feel like I was in the band and set my imagination ablaze as to what I wanted to create with my own bands."

"Well, what do you say about Dave Lombardo? He is just the guy who every drummer involved in extreme metal is in debt to on some level. I first heard Dave Lombardo on Show No Mercy, which was extreme at the time, but when the Haunting The Chapel EP and Hell Awaits were released, he just raised the bar tenfold. Pounding out of this world double kicks and drum fills so insane and fluid and tight - it was like listening to an alien play drums. The two drum fills in the song Necrophiliac are still two of my favourites for just perfect extremity. I think that having South American blood means he has a sense of rhythm and groove a lot of other metal drummers don't have. His thrash beats have a driving fluidity that just makes the song sound like it could come off the rails at any minute, but it's tight as f*** and right in the pocket. A true metal legend."

"Who hasn't this guy played for? And he's probably the only guy in the mid '80s who was close to Lombardo for sheer thrash intensity and skill. Dark Angel's album Darkness Descends is an acknowledged thrash album, but it's not mentioned in the high regard that it should be. It's a timeless album that sounds as intense as brutal as it did then, and Hoglan's drumming has a lot to do with this. He's a beast of a man but makes his wizardry on the kit look just effortless but as powerful as f*** as the only guy I've ever seen do a Neil Peart size stick toss while playing thrash."